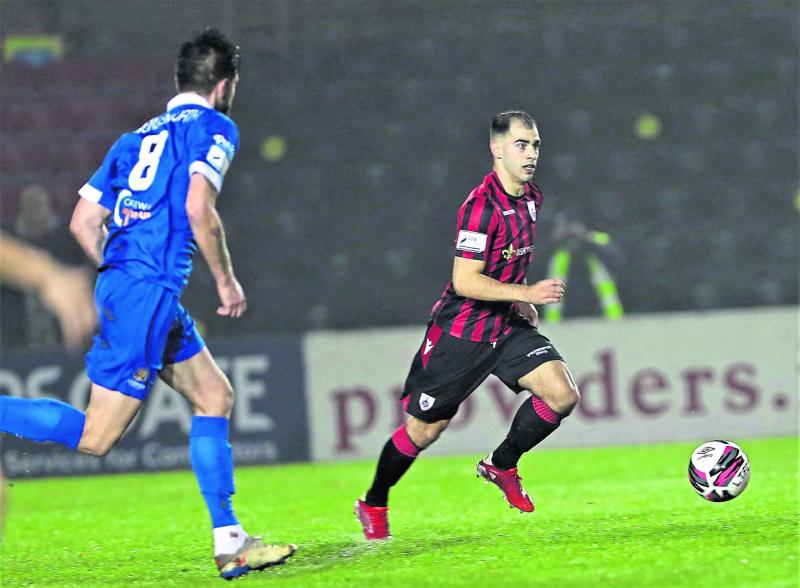 Longford Town, under caretaker manager Johnny Martin, play their 36th and final game in the 2021 SSE Airtricity League Premier Division this Friday night when they travel to Ballybofey to play Finn Harps who are fighting for their top flight lives.

Last weekend Longford played Waterford who are also at the wrong end of the table and once again the Town gave everything and deservedly drew with the very experienced Southern side who have improved so much since the arrival of manager Bircham, who has them very well organised and he has brought in many cross channel players since taking over.

Longford Town, on the other hand, had to be content with the squad they have and one has to say that the lads have given everything this season against all the odds.

Caretaker manager Johnny Martin made a few changes from the previous weekend, Joe Manley came in at the back with Mick McDonnell moving to the bench and Conor Davis started with Dylan Grimes on the bench.

There is no doubt that Waterford were the team wanting the full points and they showed that they didn't mind getting a card or two if they could get three points. Their goal was very well taken but in fairness it should have been avoided.

Longford Town got the equaliser from a penalty with the club’s leading scorer this season Dean Williams converting the spot kick.

Waterford had a player sent-off late on and it seems he got two yellow cards for mouthing to the referee who wouldn't have too many supporters around Longford from his previous performances in games that the Town played in.

Longford could well have taken full points in this game but this new look Waterford side have some very exciting players in their squad and they are a very big and physical side.

No matter who ends up second from bottom of the Premier table they should be too strong for the winners of the UCD versus Bray First Division play-off which takes place at Dalymount Park this Friday night.

Up in Donegal on Friday night the Town will be in action at Finn Park for what should be a real cracker of a game.

Harps are a massive club and they are deservedly in the Premier Division and that is down to Ollie Horgan who is doing a magnificent job for them.

Not for the first time in his career Ollie saw red in Inchicore on Friday last for two yellow cards by referee Neil Doyle who is one of the best referees in the League for many years.

Not only was Ollie red carded but he lost his very influential defender Kosovar Sadiki, also to two yellow cards. Sadiki is one of the  best defenders in the League this season and no doubt he will be a big loss to Harps in this make or break game.

Last Friday's game at Inchicore ended 2-2 with former Town loanee Sean Boyd scoring the two Harps goals that guaranteed Harps a point which put them ahead of Waterford in the race to avoid the drop.

Ollie Horgan has assembled a useful squad this season and they should be good enough to win a play-off if they need it to stay in the Premier Division.

In the previous meetings between the clubs this season there were two draws and a Finn Harps victory.

The first meeting between the clubs back in April, the game ended scoreless, but in fairness both teams had their chances to win the game.

The second meeting at Finn Park was also a draw but on that occasion, at the end of June, the game ended one all. Aaron Dobbs gave the Town the lead after 11 minutes but local hero Tunde Owolabi equalised in the 17th minute.

The third game between the clubs in mid August at Bishopsgate ended three nil in favour of Harps. They opened their scoring in the 14th minute when the unfortunate Mick McDonell put through his own goal. Ryan Rainey added goal number two in the 37th minute while Sean Boyd added no 3 after 83 minutes.

Games between the Town and Harps have been exciting over the years and we all remember the play-off at Finn Park almost twenty years ago when the Town survived after a pulsating game.

The Town are relegated for some weeks now but the hard work also starts now.

Finding a new manager is top priority at the moment and that should happen soon as it's imperative that a new man should be in place in the next couple of weeks.

By all accounts there has been a very big list of applications for the job and interviews should take place soon. The manager's job in Longford or any other club is a big one and it needs to be decided soon as most clubs are signing players for the 2022 season at this stage.

The club needs a strong manager and a strong squad if they are to be serious about getting back to the Premier Division.