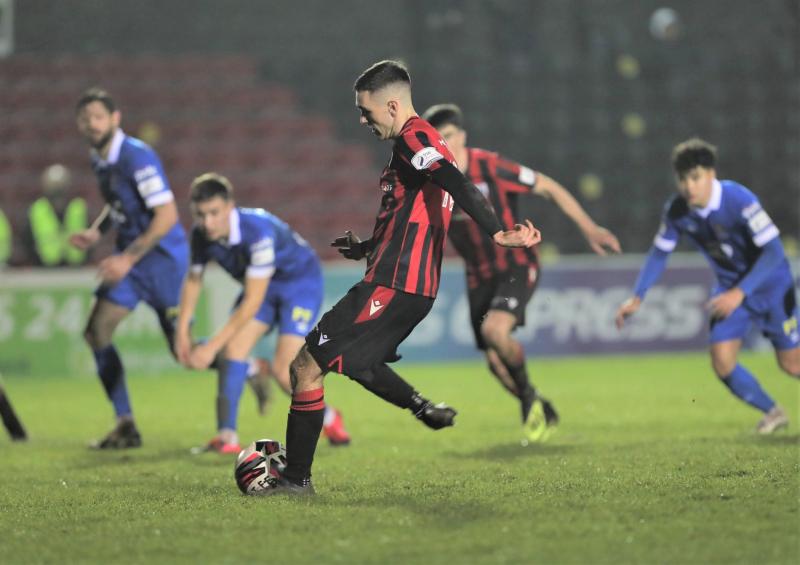 Longford Town's Dean Williams about to slot home his second half penalty that earned his side a draw against Waterford FC Picture: Syl Healy

In their final home league fixture of the season on Saturday evening at Bishopsgate, Longford Town secured a share of the spoils thanks to a 78th minute penalty from the boot of Dean Williams.

In John Martin’s second match as caretaker manager, Longford fell behind to a smashing goal from Anthony Wordsworth in the 68th minute. Waterford, who were determined to get the win that would help keep them out of the relegation play-off, were hit with a sucker blow when Williams was successful from the spot.

It certainly wasn’t the result that Waterford would have wanted as they remain in 9th place and in the relegation play-off spot on goal difference.

In the final series of matches next Friday evening, Waterford entertain St Patrick’s Athletic in the RSC and Finn Harps host Longford Town in Ballybofey. So if Ollie Horgan’s Harps manage to get the better of the visitors, then they’ll preserve their Premier Division status. It certainly makes for an exciting conclusion and although they are already relegated to the First Division, Longford are going to have a major say on how things transpire.

Longford, with caretaker boss John Martin calling the shots from the sideline, began brightly and in the 3rd minute a Dean Williams strike from outside the box was dealt with by Waterford ‘keeper Brian Murphy.

Waterford’s first decent attack arrived six minutes later as the imposing Greg Halford knocked the ball down into the path of captain Niall O’Keeffe and his effort was wide of Lee Steacy’s upright.

By the half hour mark, Longford duo Darragh Nugent and Aaron Robinson had been shown yellow cards by referee Ray Matthews, and there was little in the way of threatening goalmouth action with much of the play concentrated in the middle third.

Phoenix Patterson’s 37th minute free deflected off Town defender Aaron O’Driscoll (the  LTFC Supporters Club Player of the Year 2021) at the expense of a corner that was dealt with and the danger averted as Marc Bircham’s Waterford side enjoyed their best spell of the opening half. John Martin and Shane Griffin also had attempts as the visitors upped the ante considerably but it remained deadlocked at nil all at the interval.

Waterford, having recorded  4-1 (home) and 1-2 (away) victories over Longford in the league already, were keen to make it a hat-trick of triumphs over their midland rivals and shortly after the restart  ‘keeper Brian Murphy reacted smartly to deny Dean Williams who got on the end of a through ball from Darragh Nugent.

In the 50th minute, Waterford’s Jack Stafford was off target following a decent cross from Darragh Power.

Shane Elworthy became the third Town player to receive a yellow card in the 62nd minute following a challenge on Quitirna Junior Armando.

Three minutes later, the visitors drew first blood as Anthony Wordsworth showed deft skill in the box and his stunning strike flew to the top left corner of the net giving Lee Steacy no chance.

That could be hugely important for Waterford

Longford sprung Callum Warfield and Aaron McNally from the bench and Warfield almost made an instant impact however his 70th minute strike blazed over the crossbar.

Eight minutes later the equaliser did arrive. Waterford’s Eddie Nolan brought down Dean Williams and referee Ray Matthews pointed to the spot and Williams calmly and confidently drilled the ball to the twine.

Longford Town have equalised from the spot, Dean Williams the goal scorer!

That could be massive in terms of the league table..

Waterford came raiding and Junior was denied by a fine Steacy save in the 82nd minute. Two minutes later the visitors were reduced to ten men as Greg Halford was shown a second yellow (he picked up the first yellow in the build-up to Longford’s penalty).

In the 89th minute Longford’s Dean Williams was off target but it was the Waterford men who did most of the pressing over the closing minutes, including four minutes of additional time.

Longford defended resiliently though with Steacy producing some fine saves and Aodh Dervin executing a vital interception as the home side held on for a deserved share of the spoils, their ninth draw of their thirty-five game campaign to-date.

It comes down to the final day..

Plenty of drama to look forward to this coming Friday with clubs looking to avoid the relegation play-off spot and others fighting for fourth place #LOITV | #LOI pic.twitter.com/VnVanfMjNy