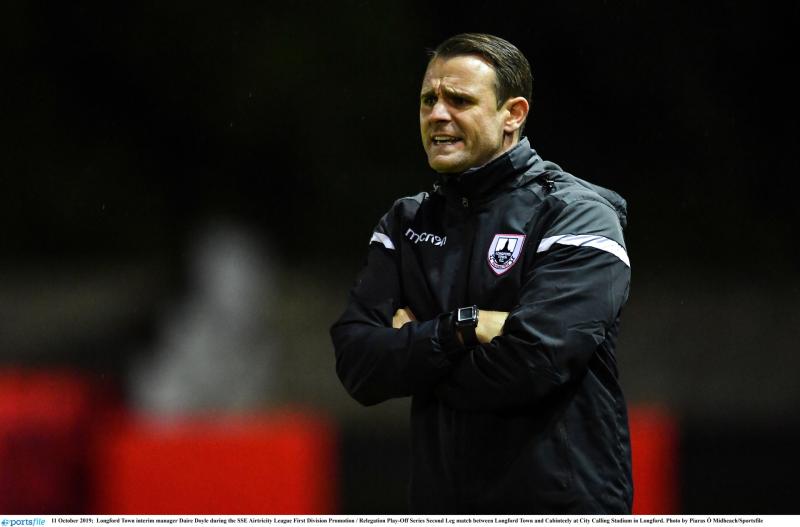 The statement added; "The club thanks Daire for his efforts over these past seasons. John Martin has been appointed acting Manager for the remainder of the 2021 SSE Airtricity League season. (Longford Town have three Premier Division league games against Dundalk, Waterford and Finn Harps remaining).

"The club will not be making any further comments at this time."

Daire steered Longford to promotion to the Premier Division in his first full season in charge, however, they found life very difficult in the top flight and have made an immediate return to the first division.

In a tweet, he revealed that he loved his time with Longford Town FC. He said he had met with the club (on Tuesday, November 2) but they couldn't agree on a way forward so we decided it would be best to part ways.

Many tributes have been paid to Daire across social media channels.

His final game in charge was against Sligo Rovers on Monday

Afterwards he spoke to RTÉ Sport, stating "I've a huge hunger to bring this club back to this level. What we’ve experienced this year will stand to our group hugely.

"A lot of our young players have gained experience at this level. You see the intensity these players can play at and I feel, if we can keep the core of this group together, our club can get in a position next season to get promoted again.

"If we’re in a better position with these players going forward, I feel we can definitely be more competitive with a more experienced group."

After meeting with our club today,we couldn't agree on a way forward so we decided it would be best to part ways. I've loved my time @LongfordTownFC, a fantastic club with great people & supporters.Thank you for my time as manager.I can't wait for the next opportunity & challenge

I want to wish everyone at the club the very best for the future and to thank all of those who have supported & helped me along the way - too many to mention in a tweet. I hope to see Longford Town back at the top table very soon ⚫

Well done on your achievements with Longford bud...enjoy the time off with Kate and the kids you'll be back fresh and ready for the new challenge when it arises

Doyle done a good job at Longford all things considered and seems highly regarded by those affiliated with the club. Doubt he’ll be out of a job for too long https://t.co/heCqlL1gWG

Thanks @dairedoyle80 for everything ❤️ Best Of Luck in the future. Met some lovely and amazing people since I started stewarding about 5 years ago in Longford and you are up there as one of the nicest ❤️

Shame to hear about Daire Doyle leaving Longford Town. One of the nicest people you'll come across in this league. Hopefully won't be long before he's back involved - Just wasn't to be this year in the end

Pity. Saw Longford several times this season and they were always really tough to beat. Just didn’t score enough. Never got any sense that DD had “lost the dressing room”. Hopefully he’ll be back in management soon. https://t.co/yTZ33q5f6H

Gutted for Daire Doyle. Seems like an honest, hard working bloke, a good coach & someone who has worked his arse off the last couple of years.

Maybe the promotion came too soon, maybe Longford just weren't in a position to back him but he'll do well in the game in the long run. https://t.co/alXSVr1cYv

Longford Town have conceded 17 goals in 33 games from the 80th minute onwards losing some valuable points in the process.

I feel for Daire as his squad didn’t have the depth and overall quality to cope with the PD. And his budget wouldn’t have been near many of his rivals.

Didn't expect to see this he was just on a Podcast talking about the Future with Longford like he was gonna stay https://t.co/PtNiAuxyqC

Victim of his own success really - that Longford side had no business getting promoted, they were well and truly unspectacular in the First Division and there was no way they could get anywhere in the Premier Division. Very harsh given the promotion was unexpected and came.. https://t.co/burmpBsdXl