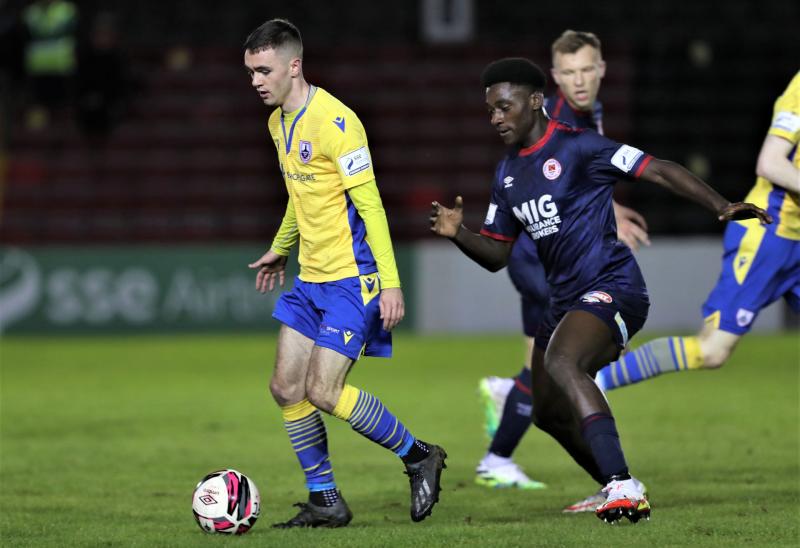 While relegated Longford Town crashed to another defeat in the Airtricity League Premier Division at Bishopsgate on Friday night, the final result was rather harsh on the home side who conceded a couple of late goals.

Second in the table St Patrick’s Athletic were clinical in attack with striker Matty Smith completing his hat-trick approaching the end of the game and Longford were left to rue a few missed chances which is the story of their fierce struggle this season.

The Town also had a strong case for a couple of penalties, the first in the 36th minute when St Pat’s defender Paddy Barrett impeded Rob Manley on his way through but infuriating   referee Ray Matthews waved play on.

And it looked like a clear handball in the box when Aaron Robinson had his shot blocked by Ian Bermingham in the 76th minute with St Pat’s leading 2-1.

That spot kick claim was also ignored by the match official but it was always going to be a real uphill battle for Longford from the moment St Pat’s broke the deadlock in the 29th minute following a fine finish from Smith.

The Town fell further behind in the 44th minute when a Smith header following a Robbie Benson corner was deflected over the line but the midlanders should have scored moments later when Williams squandered a clear-cut opportunity of closing the gap.

The lone Longford striker also had a header (19th minute) and a shot (25th minute) saved by the St Pat’s keeper Vitezslav Jares and it must be said that the Inchicore outfit were somewhat fortunate to be in front at the break even though they did create another couple of chances.

Nothing was going right for the Town, despite a determined display, but they got a badly needed break in the early stages of the second half when Williams broke clean through with no flag for a possible offside situation and he planted the ball in the back of the net in the 51st minute.

That was the way it remained until late in the game and whatever hopes Longford had of snatching a draw were dashed when substitute Alfie Lewis scored the third goal for St Pat’s in the 84th minute.

And it got even worse for the Town with the defence split wide open when Matty Smith was left with the simple task of tapping the ball into the empty net from a few yards out after Darragh Burns broke clean through to create the opportunity for St Pat’s fourth goal in stoppage time.

Longford have just four fixtures left to play in the top flight, starting with a visit to the Showgrounds for the rearranged clash against Sligo Rovers on Monday night next, and manager Daire Doyle might as well give the other members of the squad a run with nothing but pride to play for during the remainder of this  demoralising season.