Longford Town at home to St Pat's on Friday; away to Sligo Rovers on Monday 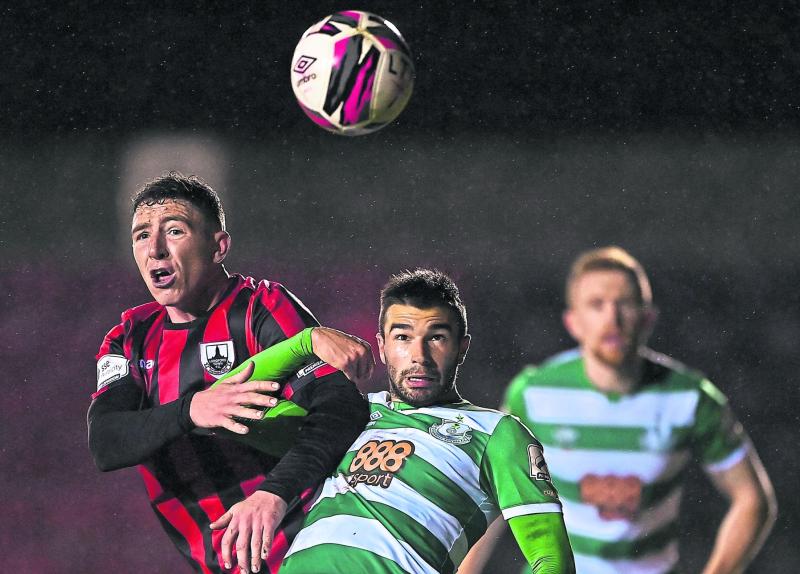 After playing table toppers Shamrock Rovers at Bishopsgate on Saturday night last, relegated Town will face the second and third teams in the table with the refixed away game against Sligo Rovers on Monday night next.

The Town were unable to play loan players Dean Williams and Darragh Nugent in the 1-0 defeat against Shamrock Rovers and were also missing the injured Dean Byrne.

At this stage of the season with five games left, maybe it's time to give some of the younger players in the squad a run out.

Current under 19 player Ben Lynch got another full game against Rovers and he didn't look out of place in the starting eleven.

Two other under 19s Aaron McCabe and Callum Warfield made brief appearances late on and striker McCabe almost got through on goal only for a bad bounce of the ball.

One has to say that the Town fought to the final seconds of the game and that speaks volumes of the whole squad of players.

On Friday night second in the table St Pat's come to Bishopsgate and they will be hoping to strengthen their position in the table.

The teams met three times in the league this season starting in Richmond Park back in April when the home side won three nil with goals from Ronan Coughlan and Chris Forrester (2), all scored in the second half.

St Pat's then won 3-1 at Bishopsgate with the Town goal coming from an Aaron Dobbs penalty on 48 mins. St Pat's goals came from Robbie Benson, Mattie Smith and Ronan Coughlan.

The third game in early September was a close encounter with the home side getting through 3-2. Billy King, Chris Forrester and Darragh Burns scored for St Pats while Dean Williams and Conor Davis replied for the Town.

There will be a very familiar face in the St Pat's dugout on Friday, former Town favourite and manager Alan Matthews is now in the St Pat's management team and no doubt he will get a real Longford welcome from the Town supporters.

Longford have to travel to the Showgrounds for the refixed league game against Sligo Rovers on Monday night and they will be also looking for vital points as they try to guarantee a place in Europe  next season. Sligo's form has been erratic to say the least as their result against  Finn Harps would suggest. Harps had centre half Sadiki sent off after only 5 minutes and they came from behind to draw 2-2.

Goals from  Johnny Kenny and Carrick on Shannon native Niall Morohan put Sligo in the driving seat early in the second half and it looked bad for Harps but goals from Boyd in the 85th minute and an equaliser from Karl O'Sullivan in the 93rd minute gave Harps an unlikely point.

The three previous meetings between the Town and Sligo were close games with the first meeting at Bishopsgate ending one nil to the visitors with a goal from defender Gary Buckley.

The second game was in the Showgrounds and the game ended 2-0 to Sligo. The third meeting at Bishopsgate was decided by a Jordan Gibson goal in the 25th minute in another win for Sligo.

Let's hope that the long suffering Town supporters will come out for Friday's fixture as it's the second last home game of the season.