Final game in the Qualifying Round of the UEFA European Championships 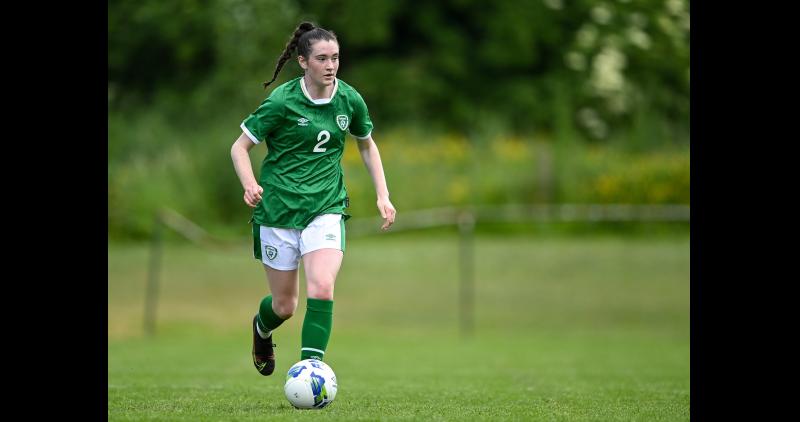 Melissa O'Kane in action for the Republic of Ireland U-19s

Mercy Ballymahon Secondary School student Melissa O’Kane featured in the Republic of Ireland Women’s U-19 win over Northern Ireland in the final game in the qualifying round of the UEFA European Championships played at the Markets Field in Limerick this Tuesday.

The talented soccer player, who plays with Athlone Town in the National League, was brought on at the start of the second half and it is a tremendous honour for the Ardagh girl O'Kane to represent her country at such a high level.

Victory was deserved for the Republic of Ireland Women's Under-19s and Dave Connell’s team were unlucky to lose in their previous two qualifiers against England (0-1) and Switzerland (2-3) during the past week but they knew that a draw or win in this game would mean a secured spot in Group A of the competition.

Ireland started the game in confident fashion with Jessie Stapleton using possession well by building play from the back, while the creative Ellen Molloy buzzed around the pitch ready to unleash her killer sting. It was hardly surprising that both of those players supplied the goals.

The first half was slow with a few missed attempts on goal for Ireland.  Molloy’s incredible skill on the ball had shouts coming from the crowd and an attempt at goal would result in a corner for Ireland. A shot at goal from Stapleton was impressively saved by Northern Ireland’s goalkeeper Lillie Woods in the 26th minute.

It was in the 34th minute when Molloy’s fantastic footwork provided the first goal. The Wexford Youths ace ghosted past her opponents as if they were not even there before providing the clinical finish.

The second half got underway with a brilliant goal attempt from Teegan Lynch but it fell just short of hitting the back of the net. She would set up several more chances at goal for her side but Northern Ireland’s Fionnuala Morgan would prove to be a rock that they could not move.

Relief for Ireland came In the 62nd minute when a foul on Molloy allowed Stapleton to slot in a penalty. Now two goals up, Ireland were able to settle into their groove and played some lovely football - as they have done throughout these qualifiers.

The end result means that Ireland will be in Group A when the second round of qualifiers kick off in April 2022.