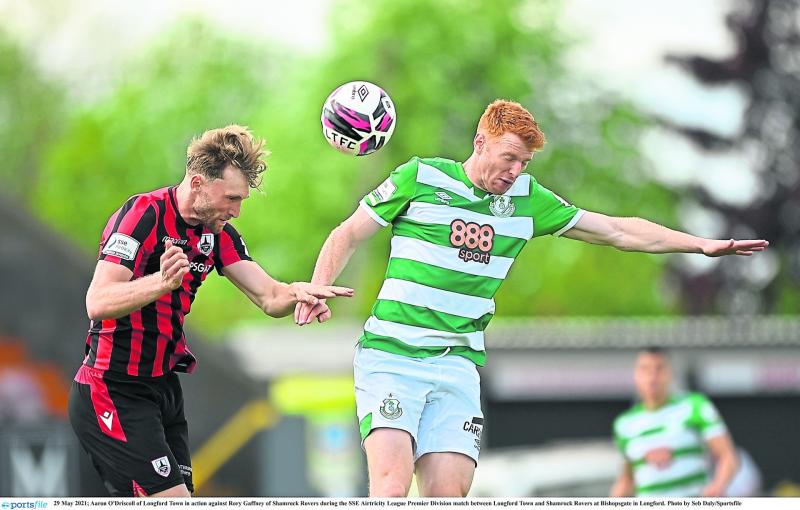 Shamrock Rovers come to Bishopsgate on Saturday night (kick-off 7.30pm) knowing a win will move them to within touching distance of retaining the Premier Division title.

Longford Town will be hoping for a rub of the green when they face Rovers. In their previous three league meetings this season, Rovers have claimed victory right at the death in all of them.

When the teams  played in Tallaght Stadium back in April, the Town had gone ahead through a Dylan Grimes penalty but Rovers snatched the win in stoppage time. It was tough on the Town.

In their last visit to Bishopsgate Rory Gaffney scored a goal in the fifth minute of stoppage time to give Stephen Bradley’s side a 1-0 win. Liam Scales, who is now at Celtic, was the matchwinner when the sides met again at Tallaght Stadium; scoring a goal deep into stoppage time.

Those results have been very much the story of the season for Town, who were relegated to the First Division on Friday night last following their 2-0 defeat away to Drogheda United.

Longford have competed well in the majority of games but their problems at both ends of the field have proved costly; not putting away their chances and then their inability to keep clean sheets.

On Friday night Drogheda United were full value for their win with Darragh Markey and Mark Doyle on the scoresheet.

Rovers come into this game on the back of a fine 2-0 win over 3rd place Sligo Rovers and a 1-1 draw against Bohemians on Monday night to move 13 points clear at the top of the table.

Defender Roberto Lopez was sent-off and will be suspended for the match against Longford.

Danny Mandroiu and Aaron Greene were on the scoresheet against Sligo. Mandroiu has been in great form this season. Graham Burke has been out injured but returned to training and should be available for the game in Bishopsgate.

With six games to go there is nothing to play for but pride for Daire Doyle’s side and no doubt they’ll do that. The rebuilding for next season back in the First Division starts now.