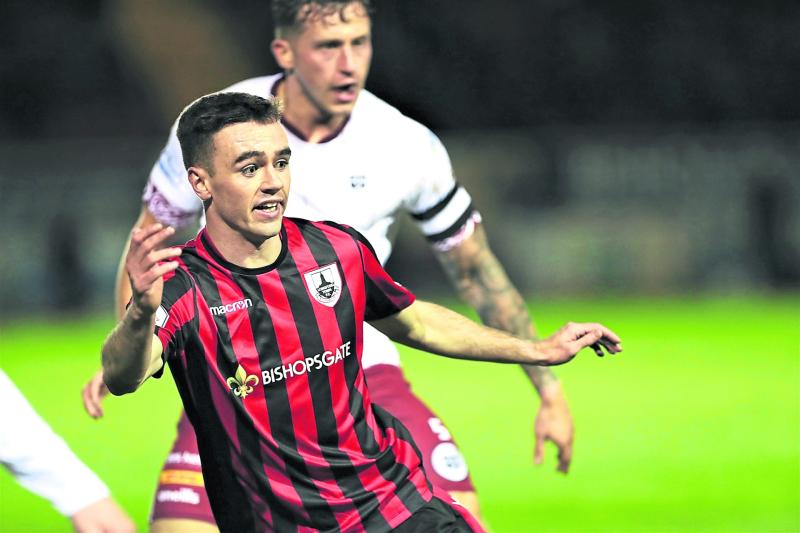 Dean Williams pictured in action for Longford Town against Bohemians in the league game at Bishopsgate on Saturday night last Photo: Syl Healy

Due to Republic of Ireland international call-ups, Longford Town will not be in action this weekend as the Airtricity League Premier Division clash against Sligo Rovers at the Showgrounds on Saturday has been postponed.

Town striker Dean Williams and midfielder Darragh Nugent (both on loan from Shamrock Rovers) were called up for the Republic of Ireland extended under 21 squad for the away match against Montenegro which takes place next Tuesday, kick-off 4.30pm.

The Republic of Ireland U-21s are in European Championship action against Luxembourg at Tallaght Stadium this Friday (kick-off 5.15pm) and the manager Jim Crawford may have to make major changes in his squad for the second of the qualifiers against Montenegro due to the Covid situation.

With Montenegro on the UK and German red list, current Covid-19 travel restrictions could see Ireland travel to Podgorica with a home-based squad. Montenegro is currently not on Ireland’s red list.

Under the current guidelines in Britain and Germany, any UK or German based Ireland Under-21 player would be forced to undergo a period in quarantine before returning to their clubs if they travel to Montenegro for the second game of this international window.

FIFA, the Premier League and the English Football League have appealed to the UK Government to relax these rules for professional footballers on international duty this month and the FAI is working closely with their colleagues at The FA on this developing story.

As the FAI awaits a possible ruling in the UK, Ireland Under-21 manager Crawford has named his extended squad for Montenegro with 13 home-based players called up for the first time.

The Town have two players in the squad as have Sligo Rovers who have Niall Morohan and Johnny Kenny also called up.