Longford Town blasted by Bohemians in the second half 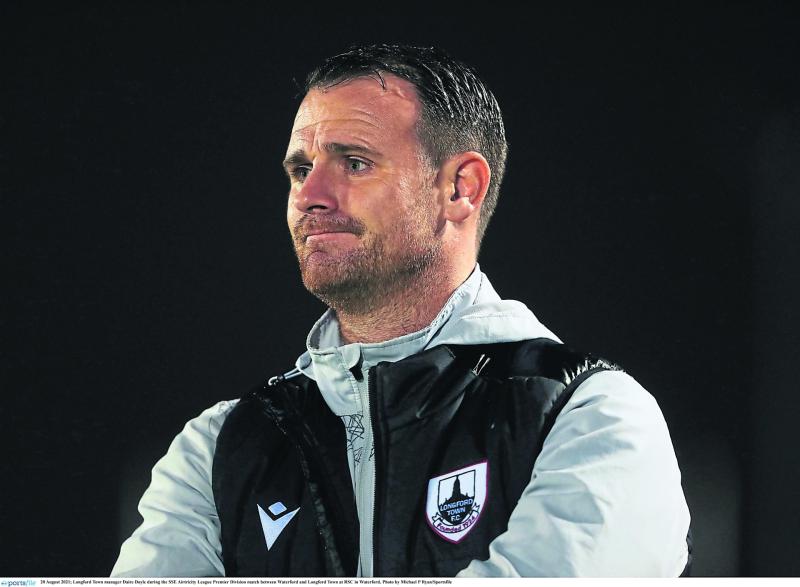 Longford Town FC manager Daire Doyle, whose side took the lead against Bohs but ended up suffering another disappointing defeat

Leading 1-0 at the break with Dean Williams scoring the goal, Longford Town were eventually blasted by Bohemians who scored four times in the second half of the SSE Airtricity League Premier Division clash at Bishopsgate on Saturday night.

The Town started the game with a real purpose while Bohs looked sluggish. The visitors had the ball in the net in the 14th minute but Georgie Kelly’s header was ruled out for offside.

It was all Town after that. In the 21st minute Aaron Robinson played the ball through the middle to Dean Williams but he was held off by Rob Cornwall. Darragh Nugent hit his effort over the bar in the 27th minute while shortly after Bohs keeper James Talbot produced  a double save to deny Williams and Nugent.

In the 33rd minute Nugent flashed a shot across the face of the goal. The deadlock was eventually broken four minutes later; Williams’ shot from a Shane Elworthy’s cross came off the legs of Talbot and he finished the rebound to the net.

Towards the end of the first half Bohs tried to get back into the game. Mick McDonnell and Aaron O’Driscoll both cleared efforts while Dawson Devoy hit his effort over the bar.

Bohs were back on level terms two minutes into the second half; McDonnell put in a clumsy challenge on Georgie Kelly and Bohs were awarded a penalty. Kelly stepped up and made no mistake from the spot-kick.

The Dublin side were now a different proposition and went ahead in the 54th minute. Aaron Robinson was assumed to have fouled Ross Tierney and Tyreke Wilson’s curling free-kick found the top corner of the net.

Longford had calls for a penalty turned down in the 66th minute when Ben Lynch appeared to be fouled by the leg of Bohs keeper Talbot but referee Ben Connolly booked Lynch for simulation.

Bohs got a third goal in the 79th minute when Georgie Kelly got his second and 17-year-old Jamie Mullins capped a fine performance with a goal in the 88th minute.