Longford Town facing a tough task away to Derry City 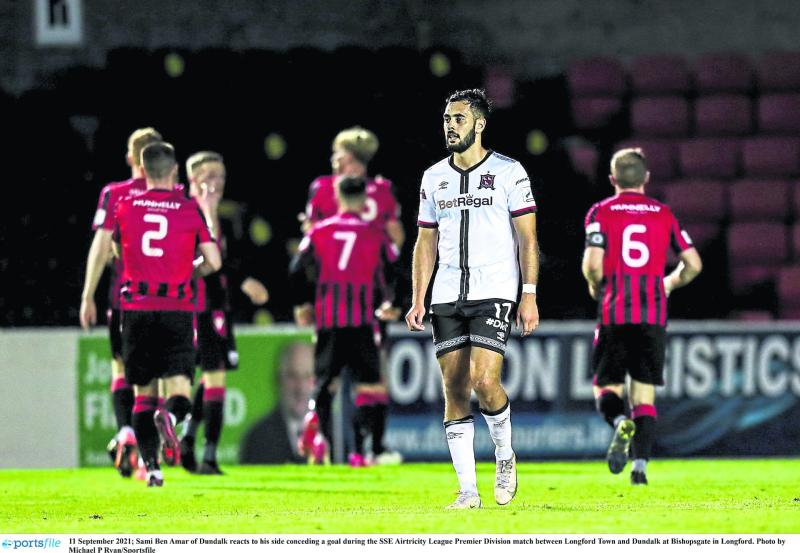 Celebration time for the Longford Town players after Aaron O'Driscoll scored the only goal in the recent win over Dundalk at Bishopsgate Pic: Michael P Ryan/Sportsfile

Longford Town travel to the Ryan McBride Brandywell Stadium this Friday to kick-off the final phase of fixtures in the SSE Airtricity League Premier Division.

Derry City are always so difficult to beat on their home ground and while the Town got a tremendous boost in the shock win over Dundalk a couple of weeks ago, they are facing a tough task at the Brandywell, kick-off 7.45pm.

Longford’s only other success in the league this season was against Derry in the opening round fixture at Bishopsgate when the home side scored a deserved 2-0 victory with goals from Dylan Grimes and Joe Gorman.

After that surprise result the Town were sitting at the top of the table and the supporters were beginning to dream of great things on the return to the top flight.

After coming from 2-0 down to snatch a draw against Bohemians in a tremendous result at Dalymount Park in the next fixture, Longford were unfortunate to suffer their first defeat at home to Sligo Rovers and the season has since developed into a fierce struggle.

Having said that, the Town almost beat Derry again at Ryan McBride Stadium in early May with Rob Manley breaking the deadlock in the 74th minute.

With time running out and Longford on the brink of a rare victory at the Brandywell, Derry snatched a stoppage time equaliser when James Akintunde fired the ball past Michael Kelly in what was a sickening blow for Daire Doyle’s side.

The third meeting between the clubs was at Bishopsgate at the end of July and on that occasion it was Derry who emerged victorious on a 2-0 scoreline in gaining sweet revenge for their surprise defeat at the same venue back in March.

In their last league fixture, Derry played neighbouring rivals Finn Harps with the match ending in a 2-2 draw but the candystripes will expect to get back on the winning track against the bottom club.

The Town were idle last weekend due to the FAI Cup quarter-finals which was bemoaned by the loyal supporters as the team were buzzing after the fantastic 1-0 victory over Dundalk at Bishopsgate.

Daire Doyle raised a few eyebrows with his team selection as quite a few regulars had to be content with a place on the bench, notably Paddy Kirk, Mick McDonnell, Aodh Dervin, Aaron Dobbs, Karl Chambers and Aaron McNally.

All the players who started against Dundalk gave everything for the cause and particularly impressive were the inspirational keeper Lee Steacy and commanding central defender Aaron O’Driscoll who scored the decisive goal in a memorable win.

The Town will need to pick up three more points against Derry if they are to harbour any slim hopes of staying in the Premier Division but will be without both Rob Manley and Aaron Robinson who are suspended.

Manley and Robinson were sent-off in yet another terrible display of refereeing in the game against Dundalk. Robinson saw red for two yellow cards but Manley’s dismissal was a complete disgrace. The ref got lots of advice from the fourth official in a very harsh decision.

Aaron Dobbs will probably be the replacement for Rob Manley but young striker Aaron McCabe should be given a chance to show that he is well capable of playing in the Premier Division.

A few minutes does not give a player a chance to prove himself and the young Cavan lad deserves an opportunity as he has a great eye for a goal.

A lot of money is being invested into Derry City who have surged up the table since Ruaidhri Higgins was appointed manager earlier in the season and the Town will be hard pressed to get a result at the Brandywell.