What a wonderful win as Longford shock Dundalk 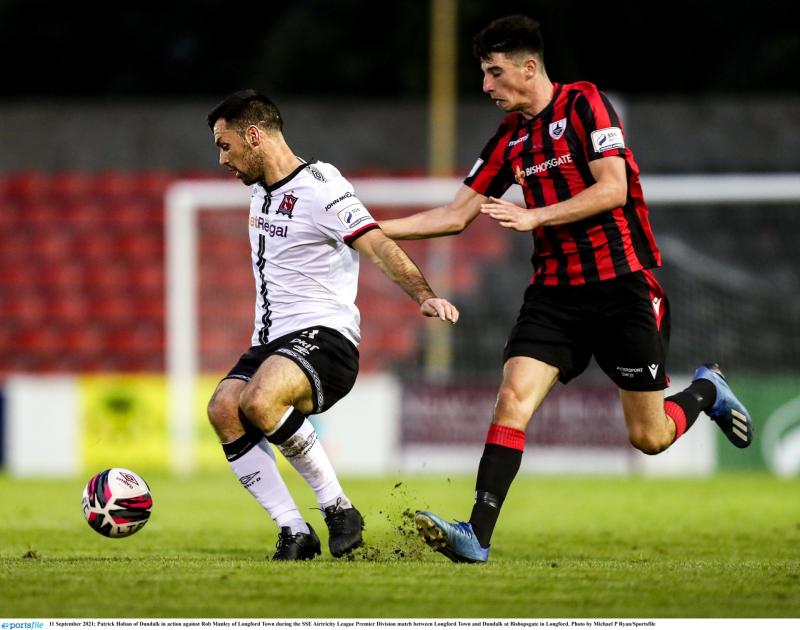 Patrick Hoban on the ball for Dundalk in this tussle with Longford Town opponent Rob Manley in the league game at Bishopsgate Pic: Michael P Ryan/Sportsfile

Longford Town finally registered their second win of the season in the SSE Airtricity League Premier Division when they shocked Dundalk at Bishopsgate on Saturday night and it was a remarkable result they deserved.

It took 26 games for the Town to follow up on their first win in the opening game of the season at home to Derry City back in March as they closed the gap on second from bottom Dundalk to 14 points in the relegation battle.

Longford did it the hard way; finishing the game with nine players after Aaron Robinson (second yellow) and Rob Manley (straight red) were sent-off. Dundalk’s Jeongwoo Han was sent-off in stoppage time.

Town keeper Lee Steacy earned his side this magnificent win with a superb save in stoppage time from Sam Stanton as Dundalk piled on the pressure in their frantic search for the equaliser.

Dundalk bossed the early stages and created two good scoring chances inside the opening five minutes. Patrick Hoban headed over a Will Patching free-kick in the fourth minute and then one minute later Sam Stanton missed a glorious chance at the far post.

After weathering the early storm Longford came into the game. Darragh Nugent had their first chance on goal in the 18th minute but his low drive went wide. He was called into action down the other end in the 31st minute when he blocked Greg Sloggett’s effort.

Andy Boyle did well to charge down Aaron Robinson’s shot in the 33rd minute. It was all go and in the 40th minute Hoban was denied by an excellent stop from Town keeper Lee Steacy. Sloggett got to the endline and played the ball across to Hoban, he controlled the ball well before taking a shot but was denied by a point blank save from Steacy.

That save proved crucial because five minutes later the home side took the lead; a free-kick from the left by Dylan Grimes was headed home by defender Aaron O’Driscoll.

Dundalk piled on the pressure after the break as they tried to get back on level terms. Daniel Cleary’s header was straight at Steacy in the 49th minute. Longford were reduced to 10 men in the 58th minute when Aaron Robinson was sent-off for his second yellow card; he’d only been booked seven minutes previously.

Patching took the free-kick and it was flicked into the path of Boyle by Hoban but the defender’s shot came off the post.

Dundalk had half chances but theTown defence stood firm and were so resilient. Longford substitute Aaron Dobbs had a chance just after he was introduced in the 78th minute but he blasted the ball over the bar.

The Town were down to nine men in the 83rd minute when Rob Manley was harshly shown a straight red for a trip on Jeongwoo Han. Minutes later Dundalk substitute Han was sent off for a tackle on Joe Manley.

Lee Steacy pulled off an incredible save in stoppage time, tipping over Stanton’s effort as the Town held out for a memorable win.