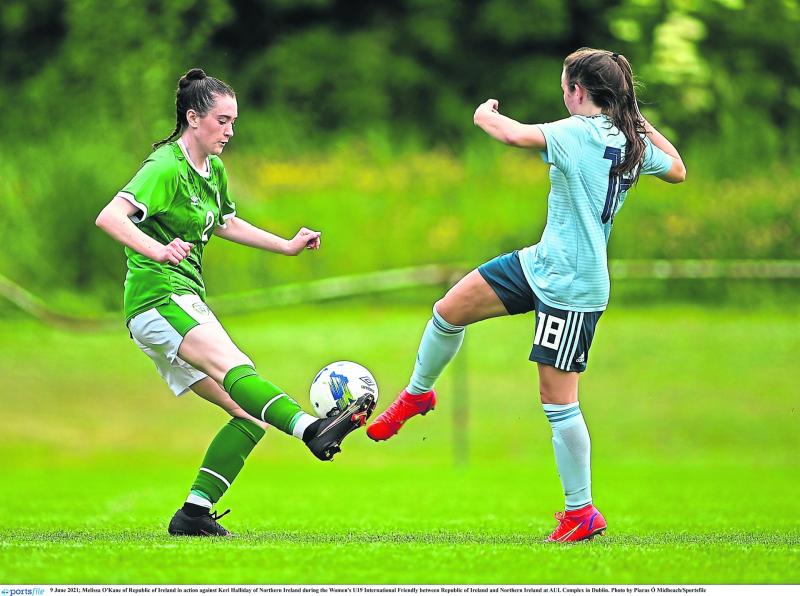 Melissa O'Kane in action for the Republic of Ireland against Northern Ireland in the Women's U-19 International friendly in June Pic: Piaras Ó Mídheach/Sportsfile

Obviously inspired by the wonderful achievements of fellow Ardagh parishioner Cian McPhillips on the athletics track, Melissa O’Kane is another rising young star who is currently a member of the Republic of Ireland Women’s U-19 soccer squad.

17-year-old Melissa made her mark on the international stage back at the beginning of June when she started in the first of the friendly double-header against Northern Ireland (winning both games) and the Ardagh lady is focused on featuring in the qualifiers for the 2021/22 UEFA Women’s Under-19 European Championships.

England, Northern Ireland and Switzerland are the opposition in October and the Republic of Ireland Head Coach Dave Connell, the former League of Ireland player, is leaving no stone unturned in the build-up to those big games for the girls in green.

There will also be a four-team mini tournament in Portugal in September along with another  four-day training camp  in Limerick from  August 22-25.

Melissa is delighted to be part of this exciting adventure and she is no stranger to success. Her all-round sporting ability yielded All-Ireland ladies football success with both her school Mercy Ballymahon and the Longford U-16 team in the recent past, not forgetting the county club championship glory with Grattans.

While soccer is now the priority for the versatile O’Kane whose talent was spotted in the midfield role she plays for Athlone Town in the Women’s National League, she featured for the Longford ladies football U-18 squad who beat Kildare this week to reach the Leinster Minor ‘A’ Championship final against Meath in Kinnegad next Wednesday evening, August 25.

Melissa said: “I’m thrilled to be given the chance to play for the Republic of Ireland U-19’s and it was a great honour to line-out against Northern Ireland a couple of months ago in the right-full position.

“I was part of the provisional Irish U-17 squad last year but we did not get the chance to play any games due to the Covid pandemic.

“Hopefully we will do well in the European Championship qualifiers and joining Athlone Town was a big step in the right direction for me to be recognised at international level.”

From her younger days in action with the Ardagh United girls soccer side in the Longford & District League it was clear to see that Melissa was a quality footballer in the making.

She moved on to play with Kilkerrin in the Galway League and had the distinction of lining out with Longford and the Mid-Western representative sides in a couple of different grades in the Gaynor Cup as her soccer career developed.

Signing for Athlone Town in 2019 brought about the opportunity to showcase her talent in the National League and at this moment in time O’Kane is eligible to play at U-17, U-19 and senior level for the midlands club.

Melissa is now established as a regular on the Athlone senior side, such is the major impact she had made, and the Irish scouts were on the ball.

"We're under no illusion just how difficult our Qualifying Group is with England, Northern Ireland and Switzerland, so we have to be ready to meet those challenges head on. We feel that we have a talented group of players, but nothing is won on talent alone, we have to earn everything that we get,” stated the Republic of Ireland Women’s U-19 manager Dave Connell.

For Longford’s own Melissa O’Kane it is another chapter in the feelgood sporting story for the past pupil of St  Mel’s National School in Ardagh who will sit her Leaving Cert exams in Mercy Ballymahon SS in June 2022.