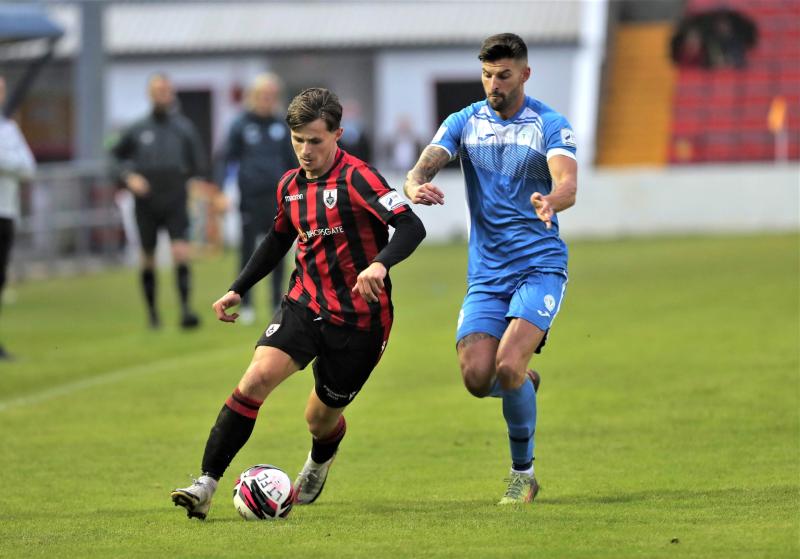 Badly in need of a win to give themselves a glimmer of hope in the fierce battle to avoid relegation in the SSE Airtricity League Premier Division, Longford Town suffered a shattering blow in crashing to a demoralising defeat against Finn Harps at Bishopsgate on Saturday night.

This latest setback leaves rock bottom Longford 14 points behind the next lowest team in the table, Waterford, with the sides clashing at the RSC on Friday night next.

After going so close to scoring with just a couple of minutes gone on the clock when a dipping left wing cross from Paddy Kirk clipped the top of the crossbar, the Town fell behind in the 14th minute.

Jordan Mustoe broke into the box and his shot was deflected into the back of the net by the unfortunate defender Mick McDonnell with the Longford keeper Lee Steacy left stranded.

The home side battled back and almost equalised in the 34th minute when a cracking long range strike from Aodh Dervin was brilliantly saved by the agile Finn Harps keeper Mark McGinley.

That proved to be a turning point as three minutes later the Donegal side scored a second goal through Ryan Rainey who blasted the ball to the roof of the net past the helpless Steacy from well outside the box.

While this spectacular finish left Longford in serious trouble, the midlanders tried hard to get back into contention and almost pulled a goal back in the 53rd minute when a close range shot from Mick McDonnell was well saved by McGinley.

Soon after Town defender Aaron O’Driscoll had a great opportunity from a free header but he directed the ball straight at the competent McGinley who played a leading role in this crucial win for Harps in their battle to pull away from the relegation zone.

Referee Derek Tomney issued several yellow cards during the course of the game and it even extended to the sideline.

Harps manager Ollie Horgan was booked for a second time in the 77th minute for showing dissent at decisions made by the match official and he was banished to the stand for the remainder of the game.

The visitors scored a third goal in the 83rd minute when a Sean Boyd header from a few yards out hit the target to complete another tale of woe for Longford Town.