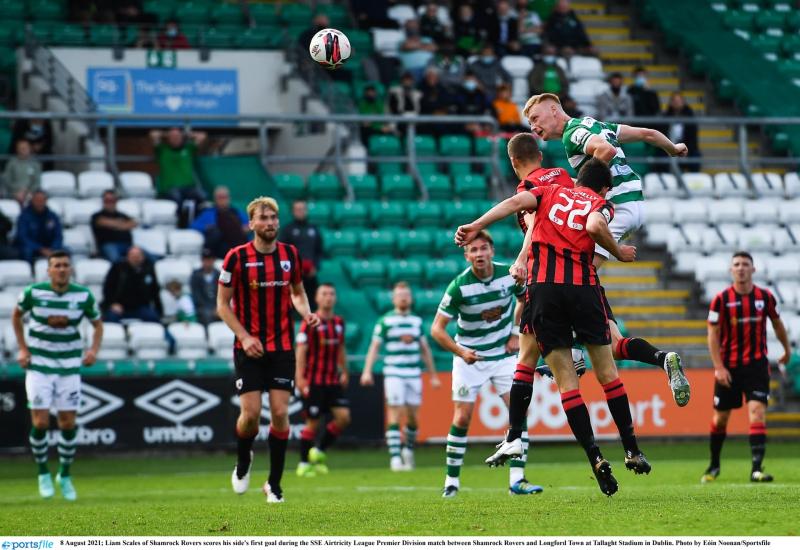 A Liam Scales header winning the game for Rovers against Longford Town in the 5th minute of stoppage time Pic: Eóin Noonan/Sportsfile

For the third time this season Longford Town suffered the shattering blow of conceding a late, late goal against the reigning league champions Shamrock Rovers.

The Town were on the brink of what would have been a tremendous draw at Tallaght Stadium on Sunday, only for Rovers defender Liam Scales to head home a last gasp winner in the fifth minute of injury-time.

It was a cruel setback for courageous Longford who had defended so well and Rovers became very frustrated indeed in their attempt to find a way past the inspired Lee Steacy.

With Waterford and Finn Harps both winning at the weekend, the Town are now a massive 12 points adrift at the bottom of the Premier Division table and avoiding relegation is becoming increasingly unlikely at this stage of the season.

13 league fixtures remain, the first of which is a must win match against Harps at Bishopsgate on Saturday night next.

Steacy stopped a shot from Graham Burke in the 13th minute and then dealt comfortably with a free-kick taken by Towell in the 27th minute.

Rob Manley had a chance for Longford in the 20th minute but Liam Scales defended well to clear the danger.

Aidomo Emakhu had a chance early on in the second half but the effort went wide and Rovers substitute Rory Gaffney came close soon after his introduction as the home side tried to break the deadlock.

Rovers keeper Alan Mannus then saved a long range strike from Aaron Dobbs before Graham Burke tested Lee Steacy who produced an excellent save to keep his net intact.

Longford were under serious pressure in the  closing stages of the game with Steacy saving from Kavanagh, Burke and Mandroiu while in injury time a Ronan Finn header came off the post.

Just when it looked like Longford had done enough to pick up a precious point, Scales rose high to find the back of the net from a firm header in a dramatic finish.