First round clash at Bishopsgate on Saturday evening, kick-off 7.30pm 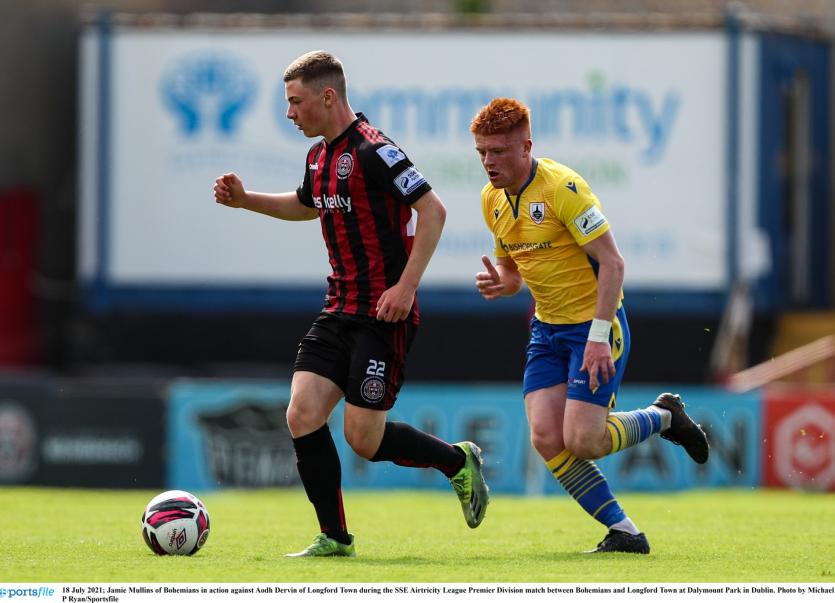 Jamie Mullins on the break for Bohemians with Longford Town opponent Aodh Dervin in pursuit. Action from the league game at Dalymount Park on Sunday last Pic: Michael P Ryan/Sportsfile

Longford Town take a break from league action this weekend when they meet Leinster Senior League outfit Bangor GG at Bishopsgate in the first round of the FAI Cup on Saturday evening, kick-off 7.30pm.

When the draw was made last week, the Town and Bangor GG were the last two teams in the drum. The Dublin opposition are a combination of three Leinster Senior League clubs - Bangor Celtic, Greenhills and Greenpark.

Non-league side Bangor GG will undoubtedly  be a tough nut to crack, despite the amalgamation only being formed in 2019. It is very interesting to note that the Town played Bangor Celtic in the second round of the FAI Cup in August 2017 with the match at the Iveagh grounds.

Cup games against lower division teams have the habit of upsetting league form and games like this can be a real banana skin for the senior clubs.

When Longford played Bangor Celtic in the FAI Cup four years ago, it took a 71st minute goal from substitute Don Cowan to eventually settle the issue.

The Town, who were then managed by Neale Fenn, had to battle all the way to the final whistle and they had to thank keeper Jack Brady who made a few excellent saves in the hard earned 1-0 victory.

Ironically, Longford’s all-time leading goalscorer Davy O’Sullivan - who played for the Town in that Cup clash at the Iveagh grounds - will be lining out in attack for the opposition on Saturday night.

Striker O’Sullivan will be fondly remembered during his time with Longford, scoring some very special and important goals.

Not a lot is known about this Bangor GG FC outfit, only that they are a decent Leinster Senior league side who cannot be taken for granted with some excellent players in their squad.

Everyone knows all about Davy O’Sullivan and they also have Derek Prendergast on their team, the vastly experienced defender who played with Bray, Drogheda, Athlone Town, Bohemians and Shelbourne in both the Premier and First Division.

Evan Farrell joined Bangor GG this season after spending six seasons with UCD and gaining promotion to the top flight with the College team in 2018.

Aaron McGuirk, who played with Cherry Orchard, and former Longford and Athlone player Cian Byrne are also with Bangor GG.This could prove to be a difficult task for the Town, especially with them at the bottom of the Premier Division table and who have not won a match since beating Derry City at Bishopsgate in the middle of March in the opening game of the 2021 season.

It is hard to believe that Longford have gone 20 games without a win but have drawn eight of those league fixtures.

The Town were in action at Dalymount Park on Sunday last and came away with a deserved 1-1 draw against Bohemians.

Admittedly, Bohs made a few changes to their starting team for the league clash against Longford as they are back in action in Europe again this Thursday night.

The Town will need to be at their best if they are to progress to the next round of the FAI Cup. This is not the time for major changes to the team selection as the club bid to get back in winning form against Bangor GG.