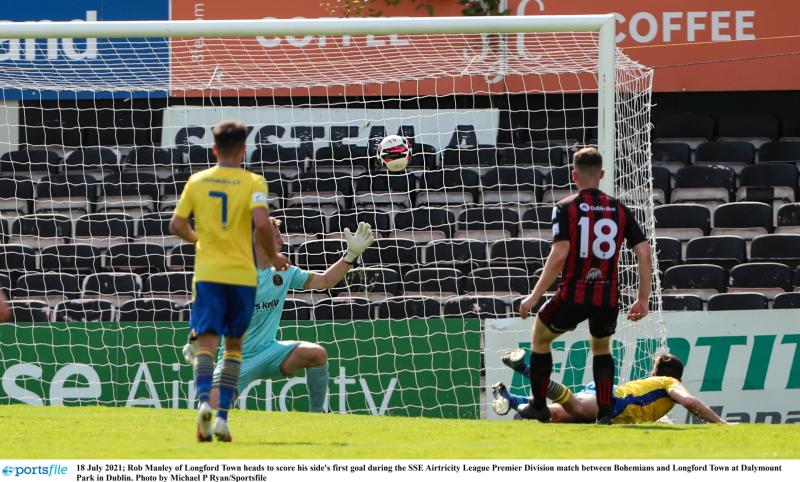 Rob Manley (grounded) gets his head to the ball to score for Longford Town in the first half against Bohs at Dalymount Park on Sunday Pic: Michael P Ryan/Sportsfile

For the second time this season Longford Town came away from Dalymount Park with a well deserved draw against Bohemians and, once again, it was goalkeeper Lee Steacy that played a major role in claiming the precious point with a number of superb saves throughout the Premier Division match on Sunday.

Longford took the lead on 38 minutes when Rob Manley got on the end of Shane Elworthy’s cross to direct the ball past the opposing keeper James Talbot with a diving header.

Bohs pressed for their equaliser and it materialised in the 55th minute through 16-year-old Jamie Mullins. The youngster picked up a pass from Keith Buckley before breaking through the Town defence on his way to firing the ball into the net.

Both sides had chances to win the game but it remained deadlocked. The result leaves the Town eight points adrift of ninth place Waterford with the Blues defeating Sligo Rovers on Sunday. Finn Harps are nine points ahead of Longford in eighth position.