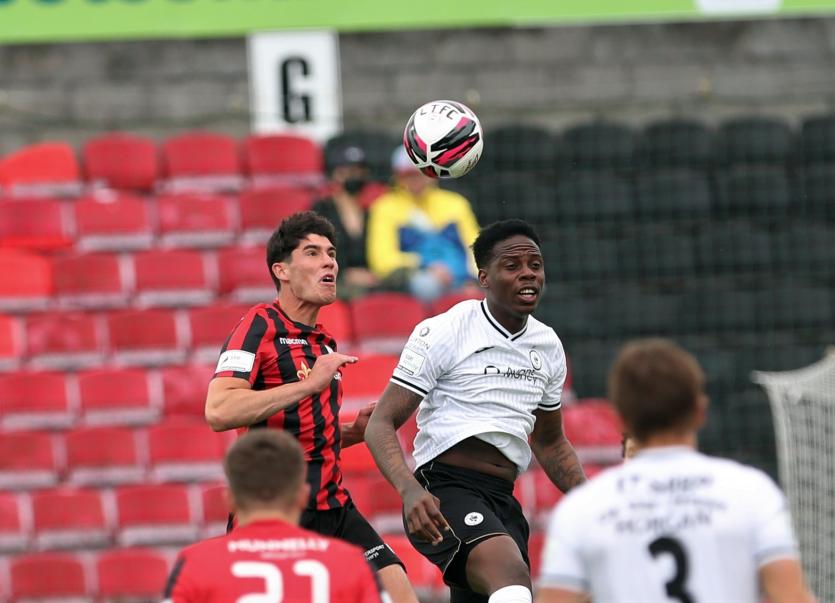 Jordan Gibson’s first half penalty proved the difference as Sligo Rovers got the better of Longford Town in the Premier Division clash at Bishopsgate on Saturday night.

Gibson converted the spot-kick in the 25th minute and although the Town created very little in the first half they were a different side in the second half but their inability to put away the chances that fall to them has once again proven to be costly.

Longford started brightly and in the third minute created the first chance; Aaron Dobbs found himself through on goal but hit the side netting before Sligo started to take control.

In the fifth minute Jordan Gibson was given space to take a shot but he blasted the ball over the bar. Minutes later his free-kick was cleared away by Town defender Aaron O’Driscoll while in the 11th minute Lee Steacy got down to save Romeo Parkes effort.

Longford were most unlucky not to break the deadlock in the 21st minute when a Dobbs header hit the post after he connected with a corner from Dylan Grimes.

The home side were made to rue that missed chance because four minutes later Sligo scored. Romeo Parkes latched on to a long ball and was through when he was brought down in the box by O’Driscoll. Gibson stepped up to slot the spot kick past Steacy to give the visitors the lead.

Lewis Banks hit his effort wide in the 41st minute and then just before the break he tested Steacy from long range but the Town netminder made the save. .

The visitors came close to doubling their advantage in the early stages of the second half. Colm Horgan played a perfect cross to Gibson but his low shot got a deflection out for a corner.

In the 61st minute Parkes got onto a long ball and raced through on goal. His shot came off the underside of the crossbar and the ball broke to Ryan De Vries but Steacy pulled off a fine save.

Longford tried hard to get themselves back into the game. In the 65th minute a long range shot from Matt O’Brien just went inches wide and one minute later Aaron Robinson’s powerful strike  was deflected out for a corner.

Ryan De Vries should’ve done better with his shot for Sligo in the 73rd minute. Then in the 86th minute Conor Davis played a long ball in the direction of Rob Manley but the Rovers substitute keeper Luke McNicholas headed it away.

The clearance fell to Aodh Dervin but his lob went over the bar in what was another frustrating experience for the Town in a torrid relegation battle.

Longford are at home again next weekend against Drogheda United.