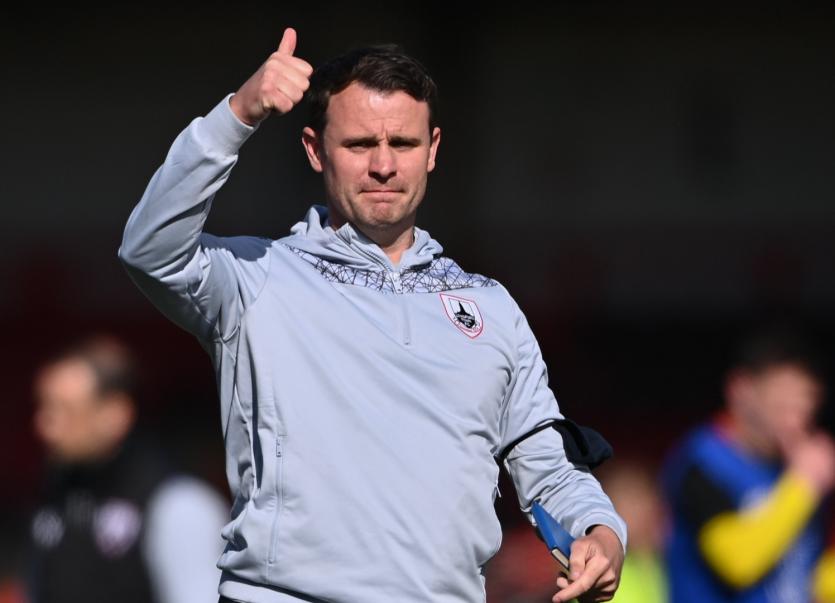 Longford Town manager Daire Doyle, who was back in the dug-out after suspension for the draw against Finn Harps in Ballybofey on Friday night

The long wait for a win in the Premier Division continued for Longford Town in Ballybofey on Friday night as Finn Harps had to settle for a draw after failing to convert a second half penalty.

Aaron Dobbs put the Town in front after 11 minutes but they couldn’t hold onto the lead and Harps were level six minutes later through Tunde Owolobi.

Longford keeper Lee Steacy once again proved his worth when he saved Barry McNamee’s second half penalty, repeating the fine feat that earned the Town a draw against Dundalk at Oriel Park the previous week.

Harps had the better of the chances and will rue not putting them away while Longford will be pleased with their defensive display that helped them hold on for another point away from home.

Manager Daire Doyle, back in the dug-out after serving his three match suspension, made a few changes. Joe Manley came in for the suspended Mick McDonnell; Shane Elworthy started in place of Karl Chambers (who actually had a good game against Waterford in Town’s previous game); Aaron Robinson came in for Dean Byrne while up front Aaron Dobbs replaced Rob Manley.

It was Dobbs who broke the deadlock with 11 minutes gone on the clock but it was controversial. A Dylan Grimes shot from distance came off the crossbar, the ball came back to Aaron Dobbs who fired past Harps keeper Mark McGinley. The linesman put his flag up for offside but referee Ben Connolly overruled him and allowed the goal to stand.

Harps were on level terms six minutes later; Barry McNamee with the pass to Tune Owolabi and he made no mistake. Harps started to play well but nearly conceded another goal when Aaron McNally’s effort got a deflection out for a corner.

On 27 minutes Harps had a great chance to take the lead but Will Seymore shot straight at Lee Steacy when he found themselves in a one on one situation. Harps pressed for a second goal but the Town defended well.

Dylan Grimes brought a great save out of McGinley on 37 minutes while just before half-time Harps created another chance but Shane McEleney’s header from a Barry McNamee corner just went wide.

Dobbs had a chance to get a second goal for Longford immediately on the changeover and four minutes later Owolabi brought a fine save out of Lee Steacy.

On 51 minutes Harps were awarded a penalty, up stepped Barry McNamee but his kick was excellently saved by Steacy. The Town keeper did well minutes later to prevent Karl O’Sullivan from getting onto the end of McNamee’s cross.

The Town were then awarded a free-kick but Grimes’ effort went wide. Both sides created chances in the search for the winner. On 72 minute Steacy saved from Harps substitute Conor Barry while one minute later Grimes should’ve done better with his volley.

As time ticked down the home side piled on the pressure but Longford defended extremely well and tried to catch Harps out on the counter-attack.

On 89 minutes a corner from McNamee met the head of Kosovar Sadiki but his glancing effort just went wide and that was that as Harps and the Town  finished all square for the second time this season.