Losing to Waterford a serious setback for struggling Longford Town 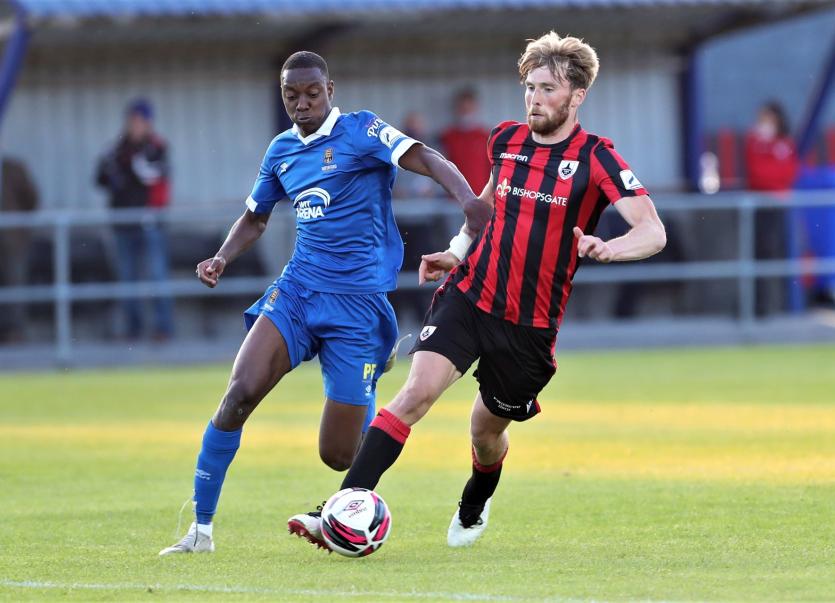 Longford Town’s winless streak in the Premier Division was extended to 16 games after they were defeated by Waterford at Bishopsgate on Monday night and automatic relegation from the top flight has now developed into a serious threat.

Waterford extended the gap between themselves and the bottom team Longford to four points courtesy of this victory and the midlanders tale of woe was complete when defender Mick McDonnell was sent-off in the 84th minute.

The Town came into this game buoyed up by the excellent draw against Dundalk at Oriel Park on Friday night but their lack of consistency to put in solid performances back to back has cost Daire Doyle’s side many times this season.

Waterford started the better and in the 17th minute they took the lead. Eric Molloy put in a cross from the left with the Town keeper Lee Steacy producing a save but was beaten by a powerful header from John Martin.

The lead didn’t last long. A wayward pass from Darragh Power was picked up by Aaron McNally who raced through in getting past Waterford players before shooting low to the net in the 18th minute.

One minute later McNally very nearly got a second to put the Town in front when he hit a stunning effort from about 30 yards out that just went over the crossbar.

McNally caused problems for Waterford but Longford failed to really trouble the visitors' keeper Brian Murphy. Both sides had possession but couldn’t muster up anything in the way of scoring opportunities.

In the 40th minute Eric Molloy hit in a cross that met the head of Kyle Ferguson but he directed his effort straight at Steacy.

Three minutes into the second half and Waterford were back in front. Aaron McNally was harshly adjudged to have handled the ball and a free-kick was awarded. The Town players switched  off when Jamie Mascoll took the free-kick and the ball fell nicely to Molloy who made no mistake in finding the back of the net.

Longford huffed and puffed as they tried to get back into the game but the competent Waterford netminder Brian Murphy was rarely put under pressure.

In the 84th minute the Town were dealt a killer blow when defender Mick McDonnell was shown a straight red card for a foul on Adam O’Reilly and this allowed Waterford to sit back in consolidating their lead on the way to a very valuable three points.