Waterford the visitors to Bishopsgate on Monday night next 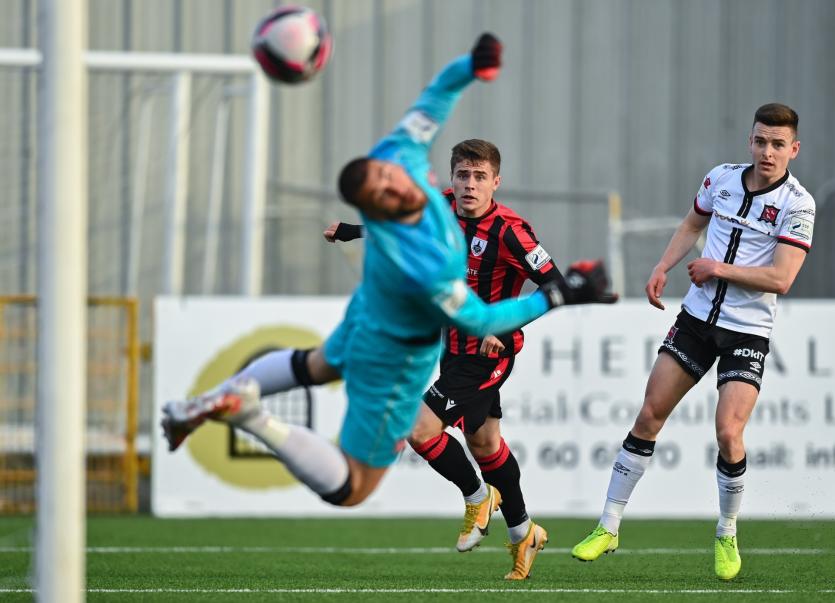 Aaron McNally scoring for Longford Town despite the efforts of Dundalk goalkeeper Alessio Abibi in the 1-1 draw at Oriel Park. Photo: Eóin Noonan/Sportsfile

Longford Town picked up a precious point in the excellent draw against Dundalk in the SSE Airtricity League Premier Division clash at Oriel Park on Friday night.

Aaron McNally had put the Town ahead on 12 minutes but Dundalk, with Vinny Perth back as manager, were level just before the half hour mark through Chris Shields.

Longford keeper Lee Steacy saved Pat Hoban’s second half penalty as the midlanders  fought it out for a positive result in the fierce battle to avoid relegation.

The home side bossed the early exchanges and their best chance came on six minutes; Darragh Leahy with a pass to Daniel Kelly but the Town keeper Lee Steacy did well to save the strike.

Against the run of play the visitors took the lead on 12 minutes; Paddy Kirk with a fine cross that fell nicely to Aaron McNally and he volleyed the ball past Dundalk keeper Alessio Abibi with a very sweet strike.

Dundalk almost got back on level terms  on 18 minutes but Patrick Hoban’s effort just went over the bar. The home side continued to hold possession but couldn’t muster up too many chances to trouble Town keeper Lee Steacy.

Longford went agonisingly close to increasing  their lead on 25 minutes; Dean Byrne with a stunning strike from distance that hit the crossbar.

Three minutes later and Dundal were level through their captain Chris Shields; Shields had an effort deflected out for a corner but he headed home the corner for the equaliser.

The goal buoyed up the home side and Darragh Leahy had a chance on 30 minutes while Daniel Kelly should have done better as Dundalk pressed to take the lead.

Patrick McEleney put in a well-timed tackle on Rob Manley on 40 minutes as the Town striker was trying to go through. Andy Boyle dispossessed Aaron McNally while Dylan Grimes' strike went over the bar as Longford finished the first half well.

After a slow start to the second half it was Dundalk who created the first chance on 55 minutes; Sean Murray played the ball to Hoban but his effort was turned away for a corner.

Down the other end and Sam Stanton came to Dundalk’s rescue when he cleared a shot from Dylan Grimes off the line after the Town player breezed past the opposing defence and shot past Abibi.

Daniel Kelly should've put Dundalk in front on 70 minutes; he was played in by Stanton but blasted his effort wide when it was easier to score.

On 73 minutes Dundalk were awarded a penalty after referee Rob Hennessey adjudged there was a handball in the box from a corner. Patrick Hoban stepped up to take the spot kick but it was saved by Steacy; the rebound was hit by Hoban who was denied again by the outstanding Town keeper.

It was all go and just after he came on Town substitute Aaron Dobbs very nearly got on the scoresheet but he was denied by an excellent save from Abibi. Minutes later Leahy had to get back and clear the danger after the Dundalk keeper was caught out of position.

Steacy denied Dundalk again on 87 minutes; first he did well to push away Greg Sloggett’s effort for a corner and from that kick he made another fine save as gutsy Longford  held on for a very valuable point.

The Town are back in action on Monday night with a massive match against Waterford at Bishopsgate, kick-off 7.45pm.

Just a single point separates the sides at the bottom of the table so a win for Longford could be a turning point in the scrap for survival in the top flight.