At home to Waterford on Monday night next 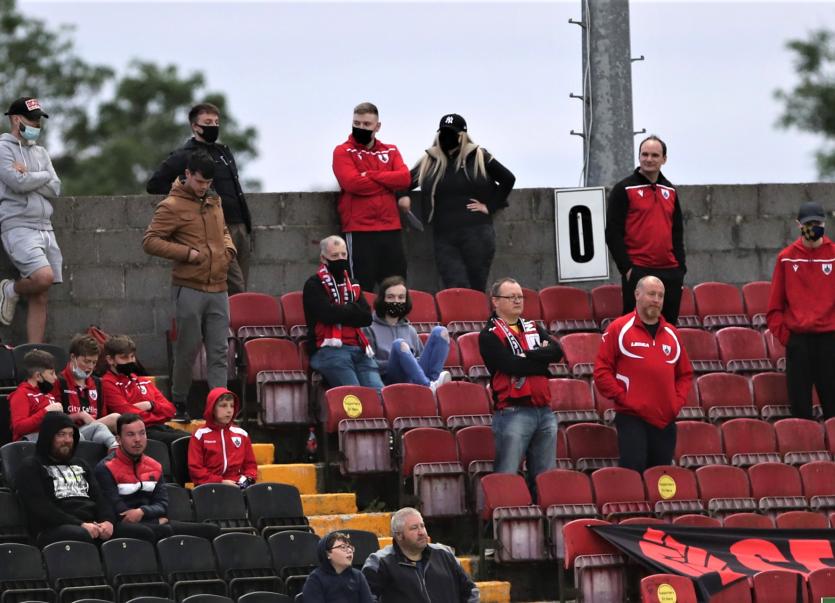 Longford Town have two very important games coming up this weekend. First up is a trip to Oriel Park on Friday to play faltering Dundalk (kick-off 7.45pm) and they are at home on Monday night next against Waterford in what must be classed as  a real relegation battle.

Last weekend there were some shock results with Finn Harps coming from behind to draw against  Shamrock Rovers.

And Waterford are no longer bottom of the table after scoring a surprise 3-1 victory  over Dundalk at Oriel Park on Friday night.

Then on Saturday night the then league leaders Sligo Rovers, who could have gone three points ahead of Shamrock Rovers,  lost to Drogheda United.

These results, coupled with Longford's  3-1 loss against St Patrick's Athletic, means that Daire Doyle's struggling side are now  bottom of the table and in serious relegation trouble.

Last Saturday night saw the return of supporters to Bishopsgate (200) and listening to some of them leaving the ground, many of them are not happy with the current situation and it's not even halfway through the season.

One wonders how the Town can play so well against the top team in the league, even though we didn't pick up any points against Shamrock Rovers after conceding  last gasp goals in both games.

When you look at the League table, Longford are bottom on seven points, having lost nine games, and second from bottom Waterford are two points better off despite losing twelve games.

There is no doubt that the Town supporters are very uneasy at this stage and action needs to be taken if we are to survive in the Premier Division.

With new owners taking over at Waterford and the promise of bringing in some new players, the pressure is on to make changes at Bishopsgate in the battle  to avoid a quick  return to the dreaded First Division.

Longford travel to Dundalk on Friday and there is no doubt that they will be hurting  after their surprise defeat at the hands of Waterford who were good value for their 3-1 victory at Oriel Park.

Dundalk, currently under caretaker boss Jim Magilton, seem to be in an awful mess and they look like losing club captain and midfield powerhouse, Chris Shields who seems destined to go across the border to double champions Linfield who are going full time.

Shields sat out the defeat against Waterford due to suspension and there is no doubt he was sorely missed.

When the starting eleven was announced on Friday night, striker David McMillan was on the team sheet but he was surprisingly replaced by other striker Ole Eric Midtskogen. Looking at the rest of the Dundalk team one would have considered them  red hot favourites to beat Waterford.

The blues new manager Mark Bircham has been in the hot seat for only a few weeks  but he seems to have the team playing for their places and their club.

Dundalk,  who qualified for Europe for many seasons where they gave a great account of themselves, are struggling at the moment  but will be very determined to bounce back to form with a win over Longford Town.

When the teams clashed  at Bishopsgate back in early May, the game ended in a 2-2 draw.

The Town were two up after only 14 minutes with goals from Dylan Grimes and Rob Manley but Dundalk hit back on 20 minutes when Junior Ogedi-Uzokwe shot past Michael Kelly.

The Town missed  a couple of good chances to put the game to bed and in the end Chris Shields scored the equaliser in the 82nd minute. I suppose the result was good in the end as Daire Doyle's squad was much understrength with four regulars missing.

Longford Town take on Waterford at Bishopsgate on Monday night next (kick-off 7.45pm) and it will be a chance to gain revenge for their defeat at the RSC back at the end of April.

On that occasion the Town lost 1-0 with the goal coming in the 9th minute when  striker Prince Mutswunguma shot past the advancing Michael Kelly in the Town goal.

This was definitely a poor  display, especially when Waterford were down to ten men for the final 30 minutes when centre half Kyle Ferguson was red carded.

Once again the inability to score came back to haunt Daire Doyle's team and Waterford were deserving winners in the end.

New Blues boss Mark Bircham may be only weeks in the job but he seems to have instilled confidence in his team and they will be hard to beat.

To date they have won three games out of 15 with wins over Longford, Derry City and Dundalk.

The Town need points in the two games over the weekend and there can be no more excuses.

By all accounts Waterford may be bringing in five or six new players in the July transfer window as they have some players in their current squad who are on loan.

Manager Bircham is confident of beating the drop and now it's up to the Town to keep the pressure on Waterford with three very valuable points at stake  in the crunch clash on Monday next.