Away to Dundalk this Friday night, kick-off 7.45pm 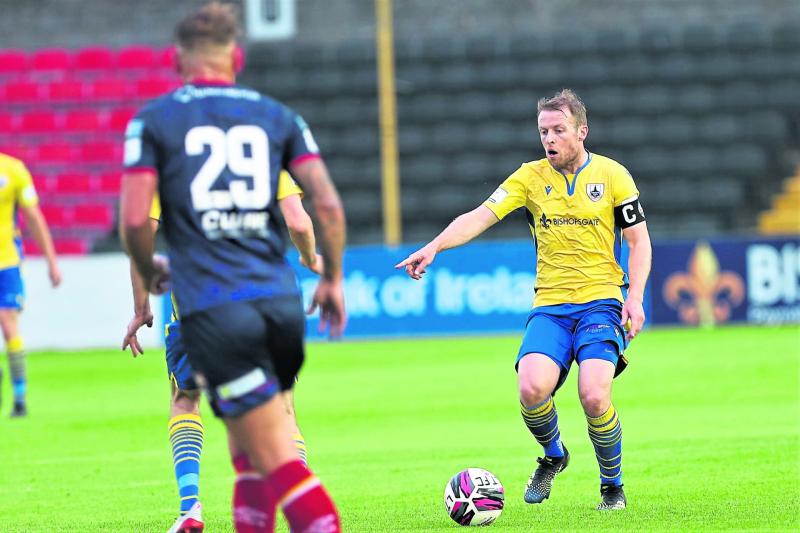 Longford Town captain Dean Zambra admitted that errors have proven costly for his side this season. The Town suffered their 10th defeat in the Premier Division after losing out to St Patrick’s Athletic at Bishopsgate on Saturday evening last.

Zambra said: “Plenty of errors have come into the games. You look at 80/85% good stuff but that little portion is costing us.

“It’s turning into goals against us. It’s something that we need to cut out; become tighter at the back and give ourselves a better platform for trying to get points on the board.”

St Pat’s took the lead just before the break with the Town levelling matters in the 48th minute. They didn’t create anything after that and the Dublin club went on to score two more goals.

Zambra was disappointed that the Town didn’t didn’t build on the equaliser.

“It was dispiriting. The best portion of the game was that 15 to 20 minutes period where we got into the game; scored a goal, made it level and then we have an error that has given away a goal. That really put Pat’s on the frontfoot again, gave them a 2-1 lead and the win was comfortable in the end.”

It has been a theme of Longford’s performances so far this season; conceding soft goals and not putting away their chances.

“Whether it’s keeping the ball a little bit more or probing more before delivering a cross or good quality on crosses. Just to give our forwards a chance and give us a chance to score more goals.”

Longford Town have won just one game this season and are now bottom of the Premier Division table. Zambra knows how important every point is for his club.

“We need to get points on the board. We can’t look at Waterford, we can’t look at anyone else. We are not concerned about where anyone else is, in the table. It’s up to us. We think we can win every game we go into if we set up correctly and give it the right endeavour.”

Zambra was honest about the season so far. For him being new boys in the Premier Division isn’t an excuse for poor performances.

“We are a young team but we have 15 games in the Premier Division now so we need to start turning that into complete performances and not having those errors." The Town are two points behind ninth spot Waterford in the table and Zambra knows they’re in a real dogfight if they want to retain their Premier Division status.

“We have got to come out and make it really hard for teams. Try our best to get points on the board in every game.

“We are creating chances but quite sporadically. We just need to do a better job. We need to present more opportunities to our forwards,” stated captain Zambra.