Automatic relegation from the Premier Division a serious threat 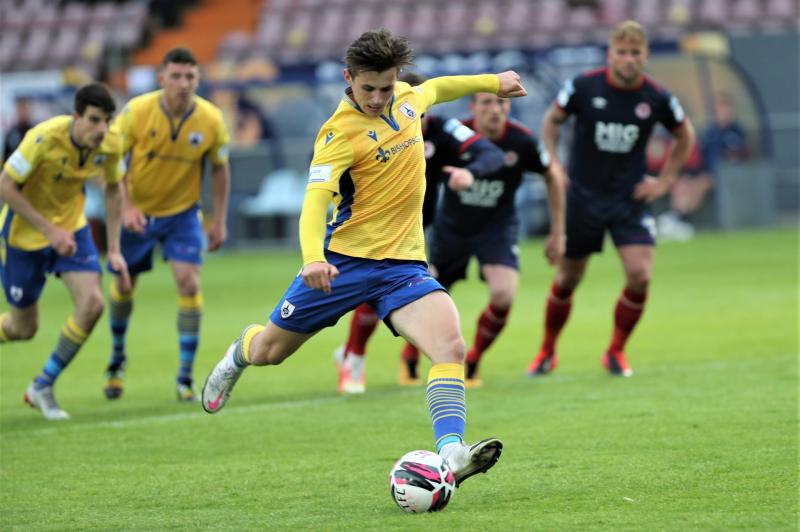 Longford Town slumped to another disappointing defeat as St Patrick’s Athletic were worthy winners in the Premier Division clash on Saturday evening that saw the return of some 200 supporters to Bishopsgate.

In truth St Pat’s should have won by more such was their dominance they enjoyed and the chances they created.

There may have been a mid-season break but it’s the same story for Longford who are now bottom of the table after Waterford scored a shock win away against Dundalk on Friday evening.

The Town can’t stop conceding and have trouble scoring. They created little during the whole game and their goal came from the penalty spot.

St. Pat’s dominated the first half but had to wait until the 41st minute to open the scoring; John Mountney’s corner was deftly headed to the net by Robbie Benson.

Town keeper Lee Steacy thwarted St Pat’s on a number of occasions. He brought off an excellent save in the fourth minute to deny Paddy Barrett and in the 10th minute Ronan Coughlan’s free-kick was superbly saved by the Longford netminder.

Barrett had a number of chances for the visitors in the first half while Alfie Lewis and Mattie Smith came close to breaking the deadlock before the visitors eventually scored.

Longford were disorganised and disjointed and created nothing in the first half to trouble St Pat’s. They struggled to gain possession and when they did they gave away the ball cheaply on a number of occasions.

Two minutes into the second half, the Town were awarded a penalty after Alfie Lewis fouled Rob Manley in the box. Aaron Dobbs made no mistake from the spot kick to level matters but the goal didn’t give Longford the impetus that they needed.

In the 63rd minute St. Pat’s went back in front; Chris Forrester’s shot was well saved by Steacy but Mattie Smith pounced on the breaking ball to fire home.

Smith should have got a second in the 71st minute but he blasted his effort over the bar while minutes later Barrett was allowed a free header that he directed off target.

It was all one way traffic and in the 81st minute Ronan Coughlan finished Darragh Burns’ cross to the net to complete another tale of woe for Longford who have won just one of their 15 fixtures so far in the top flight this season.

The Town take on Dundalk at Oriel Park on Friday night next and this fixture will be followed by a must win game against fellow strugglers Waterford at Bishopsgate on Monday June 21.