200 supporters allowed to attend the match at Bishopsgate on Saturday, kick-off 7.30pm 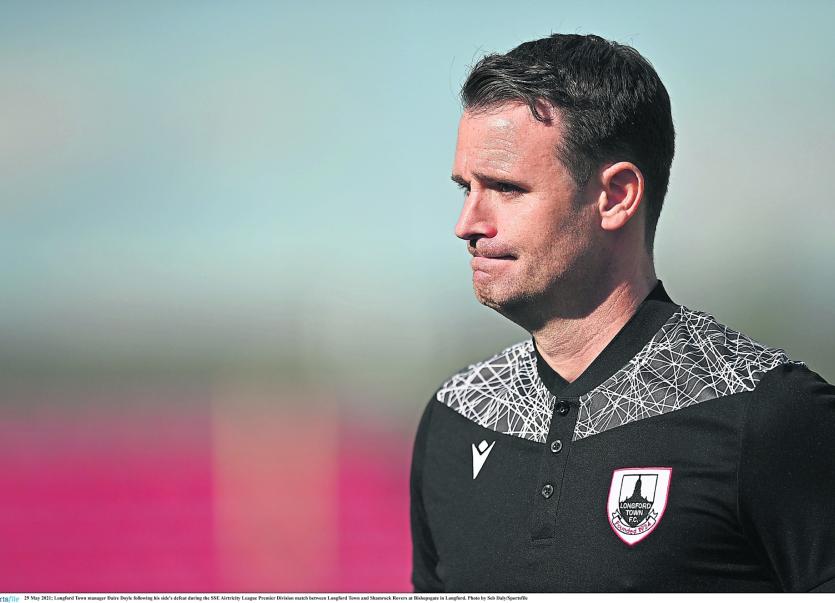 Longford Town are back in action in the SSE Airtricity League Premier Division after the mid-season break at home to St Patrick’s Athletic on Saturday evening, kick-off 7.30pm.

The buzz is on the way back to Bishopsgate with 200 supporters allowed to attend the match in line with the easing of the Covid restrictions. Priority will be given to the club’s season ticket holders after the Longford fans were locked out for many months due to the coronavirus pandemic.

Two weeks ago the Town played the reigning champions Shamrock Rovers at Bishopsgate and were so unlucky not to have picked up a precious point.

The game was seemingly destined to end in a scoreless draw, only for Rory Gaffney to score a late, late winner for the visitors approaching the sixth minute of stoppage time.

It was the second time this season that Rovers snatched a last gasp win against unfortunate Longford as the same story materialised in the clash at Tallaght Stadium.

To concede goals so late in the game is very hard to take, as was also the case in the 1-1 draw against Derry City at Ryan McBride Brandywell Stadium, but at least the Longford team are proving to be competitive against the stronger sides in the top flight.

The Town manager Daire Doyle keeps changing his starting eleven very often which is not great for the confidence of his players as he must know by now what his best team is.

Having said that, injuries have hampered his team selection but as the club move into the next phase of a long season (a total of 36 league fixtures), some sort of stability is expected.

Longford’s lack of goals is a big worry and just nine in the 14 games played to date is a poor return, considering the number of good chances that have been created.

The Town are just a point ahead of the bottom club Waterford and the pressure is piling on in the battle to avoid automatic relegation from the Premier Division.

St Patrick’s Athletic also suffered defeat in their last game before the mid-season break when they went down against Dundalk on a 2-0 scoreline.

As the table stands at the moment, St Pat’s are in third position on 25 points, six behind the league leaders Sligo Rovers and five behind the title favourites Shamrock Rovers.

With 20 goals scored to date, that is impressive form for the Inchicore outfit and when Longford and St Pat’s clashed at Richmond Park earlier in the season the home side won 3-0.

The final score was not a fair reflection on the actual trend of the game which was scoreless at the break and it must be said that the Town played well in the first half.

Once again, defensive problems led to Longford’s downfall on that occasion. Former Sligo player Ronan Coughlan broke the deadlock in the early stages of the second half, a real gift, but there was no doubting the pure quality of the special second goal scored by Chris Forrester five minutes later.

The third St Pat’s goal came in the closing minutes of the match with the so influential Forrester on target again and the Dublin club will be coming to Bishopsgate in a confident frame of mind in the firm belief that they will collect all three points.

The Town will not get anything out of the game on Saturday if they fail to curtail the serious threat of playmaker Forrester in the midfield sector.

When Longford last played St Pat’s, former Dundalk and UCD player Robbie Benson was not in action and he is a very talented player.

John Mountney was also signed from Dundalk and he is another vital cog in the St Pat’s team along with defender Paddy Barrett who also previously played with the Co Louth club.

Another former Dundalk player Stephen O’Donnell is the current St Pat’s manager and his assistant is none other than former Longford Town boss Alan Matthews who led Longford Town to those glorious back-to-back FAI Cup triumphs in 2003 and 2004.

Taking on St Pat’s is unquestionably a tough task for the Town but it is time for the players to stand up and be counted in the battle for survival in the Premier Division.