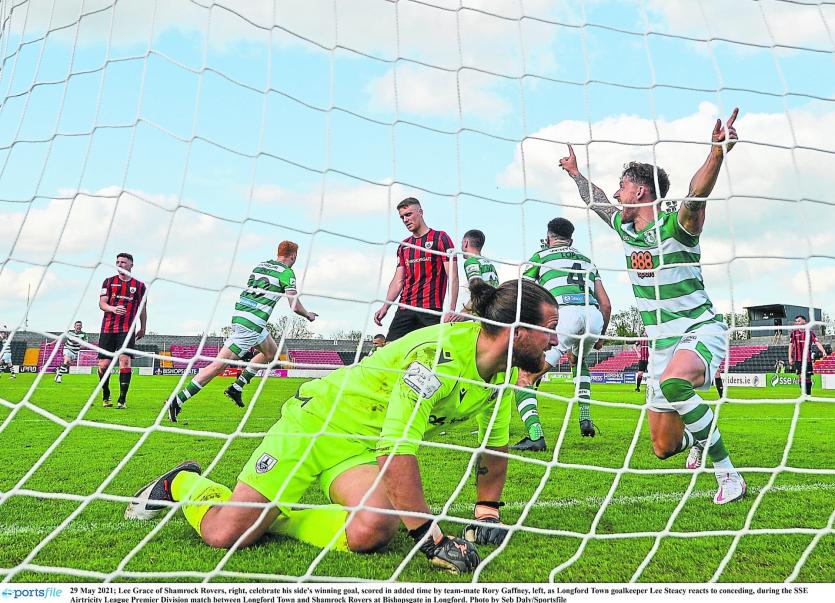 The story of Longford Town’s season so far has been the concession of costly late, late goals and they suffered the same fate against Shamrock Rovers in the SSE Airtricity League Premier Division clash at Bishopsgate on Saturday last.

Just as they had done when the sides clashed at Tallaght Stadium earlier in the season, Rovers scored a last gasp winner to snatch a precious point away from Longford Town in a dramatic end to the match.

It was a real sickening blow for the brave home side who had defended so well to keep out the frustrated reigning champions and looked like holding out for a surprise draw, only to be eventually breached with almost six minutes of stoppage time played.

Five minutes of additional time went up on the sideline board but there was no full-time whistle from referee Ray Matthews in allowing fortunate Rovers to launch one more attack which ended in Rory Gaffney planting the ball in the net after a goalmouth scramble.

Rovers dominated possession and went close to breaking the deadlock on a few occasions during the course of the contest with Gaffney having a goal disallowed for hand ball in the 29th minute of the first half.

And when the impressive Graham Burke missed a sitter in dragging his shot wide with the goals at his mercy in the 64th minute, the game looked like ending in a scoreless draw.

Longford felt aggrieved when they had a penalty claim turned down in the early stages of the match when a shot from Aaron McNally, following his penetrating run through the opposing defence, appeared to be blocked down by the arm of Rovers defender Lee Grace.

While generally on the backfoot, the Town created a couple of decent chances and were on the brink of achieving a terrific result only to be mugged in a frantic finish.

Shamrock Rovers were mightily relieved when the final whistle was eventually blown, much to the sheer display of the gutted Longford players.

It was a very cruel way to lose a game after producing such a heroic display against the best team in the country but the Town must believe in their ability to avoid the dreaded drop back down into the First Division.

Just one point ahead of the bottom club Waterford in the table, automatic relegation continues to be a serious threat for Longford who will hopefully bounce back after the mid-season break with St Patrick’s Athletic  next up at Bishopsgate on Saturday June 12.

Rovers almost scored with just 15 seconds gone on the clock at Bishopsgate on Saturday last when a shot from Graham Burke drifted just wide of the post.

Then came the Longford penalty appeal before Aaron Robinson was narrowly off target from a fine strike in the 18th minute.

That was as good as it got for the home side in the first half with the resolute defence soaking up a lot of pressure as Rovers tried to find a way through.

Following the disallowed Gaffney goal, a cracking long range shot from Burke almost found the back of the net in the 31st minute.

And there was another close call in the 39th minute when the most influential Burke fired a cross into the heart of the goalmouth but both Aaron Greene and Gaffney were unable to get the vital touch to steer the ball into the net.

The Town were living dangerously and were furious with the referee who booked Aaron Dobbs in a 50/50 challenge with Rovers defender Roberto Lopes approaching the break.

Some of the decisions made by the match official were harsh on Longford, including a free-kick that was awarded to the visitors outside the box in the 56th minute.

Up stepped Graham Burke to fire a low shot in the direction of the corner of the net but the alert Town keeper Lee Steacy produced a fine save at the foot of the post.

Soon after Gaffney directed a header over the bar before Liam Scales cut in from the left wing to create a glorious opportunity for Burke to break the deadlock but he somehow failed to hit the target from close range.

That was a very lucky escape for Longford who had a rare chance just after the Burke missed sitter when Rob Manley hooked the ball over the bar in the 65th minute.

The Town were sensing a shock result and there was another couple of anxious moments for Shamrock Rovers when substitute Dylan Grimes (from a free-kick) and Aaron Robinson had shots blocked down.

Time was running out for Rovers in their quest to collect all three points but they went close in the 88th minute when a vital interception by Town defender Aaron O’Driscoll prevented the new Republic of Ireland senior international Danny Mandroiu from hitting the target.

Moments later, Lopes directed a header wide and the action then switched to the other end of the pitch with Liam Scales going close to scoring an own goal.

Scales headed the ball over the bar in his panic attempt to clear the danger following a Town corner from Grimes in the second minute of stoppage time.

Rovers kept pressing until the end and were finally rewarded for their perseverance when the ball broke kindly for Rory Gaffney in the box and the Hoops striker made no mistake in finding the back of the net from a few yards out to inflict some more heartbreak on Longford who must be the unluckiest team in the top flight.