Longford Town take on the champions Shamrock Rovers at Bishopsgate 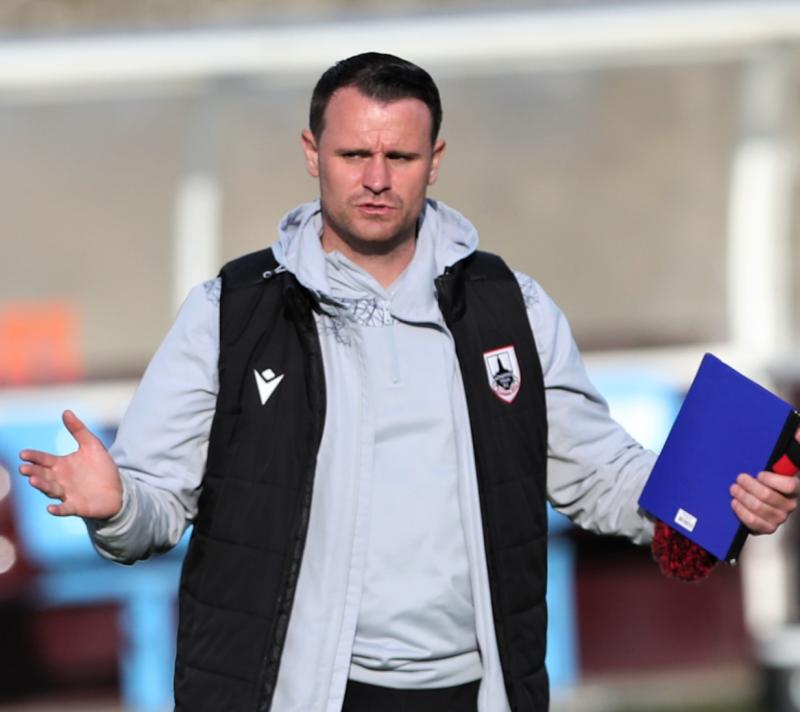 Longford Town manager Daire Doyle pictured at the Drogheda United grounds on Monday night last as his side crashed to another defeat in the SSE Airtricity League Premier Division Photo: Syl Healy

They don't come much bigger than playing the top team in the country when you are chasing points and that is what Daire Doyle's struggling Longford Town team are facing this Saturday at Bishopsgate, kick-off 4pm.

Not only did managerless Dundalk beat them last weekend, but also destroyed their magnificent unbeaten record of  33 league games

Injury-hit Rovers lost again on Monday night last  against Sligo Rovers who have replaced the Hoops at the top of the Premier Division table.

We can expect fireworks from this multi-talented Shamrock Rovers team on Saturday as they really don't take too kindly to defeat as manager Bradley always chases perfection and Longford can expect a very tough task.

Looking at the Shamrock Rovers squad from the game against Dundalk there seemed to be a  few regulars missing including Ronan Finn, Chris McCann and Sean Kavanagh who all played in Tallaght Stadium when the clubs clashed in mid April.

Such is the strength of the Rovers squad that they were able to bring in the experienced Joey O'Brien, Rory Gaffney and Gary O'Neill with the first two having played in England for many years.

When the teams met in Tallaght Stadium there is no doubt that Rovers were so lucky to take all three points, especially with the performance of the referee Rob Hennessy.

The Town went ahead in the 7th minute from the penalty spot when central defender Roberto Lopez brought down Aaron Dobbs as he headed for goal. The  referee awarded a penalty but to the disbelief of all in attendance only gave a yellow card to the defender who should have been sent-off.

Dylan Grimes stepped up and sent the experienced Rovers keeper Alan Mannus the wrong way from the penalty spot to give  the Town a shock  lead.

Rovers put on the pressure trying to get back in the game but the Town stood solid against the reigning league champions.

The very lively Dylan Grimes caused many problems for Rovers while Aaron O'Driscoll was  excellent in the centre of the Town defence.

Rovers got back in the game in the 53rd minute when the referee awarded them a penalty after Dobbs was adjudged to have fouled Lopez who ironically should not have been on the pitch.

Graham Burke scored from the spot. Both sides were pushing for the winner with the Town playing some exciting football in pushing Rovers to the limit.

Aaron Robinson was denied a goal with a stunning Mannus save while Karl Chambers shot over the bar.

Rovers had their chances also but it seemed that the Town were going to go home with a precious point.

In the third minute of stoppage time, referee Hennessy awarded Rovers a dubious free-kick in a dangerous position.

Dylan Watts took the free-kick which was blocked by the Town wall and it fell to Sean Gannon whose  shot deflected off Aodh Dervin and it wrong footed Town keeper Michael Kelly to give Rovers an undeserved victory.

There is no doubt that injuries have hampered Daire Doyle and his management team since the beginning of the season but that situation seems to be improving in recent weeks.

Longford, along with fellow strugglers Waterford, are being cast adrift at the wrong end of the table.

It was a bad weekend for the Town with the defeats against Drogheda United (4-1) and the new league leaders Sligo Rovers (2-0).

Manager Daire Doyle has a massive job ahead of him to try and get his side away from the dreaded bottom two and it appears that the best Longford can hope for at this stage of the season is the relegation play-off.