Longford Town in deep relegation trouble after another defeat against Drogheda

Shamrock Rovers the visitors to Bishopsgate on Saturday next 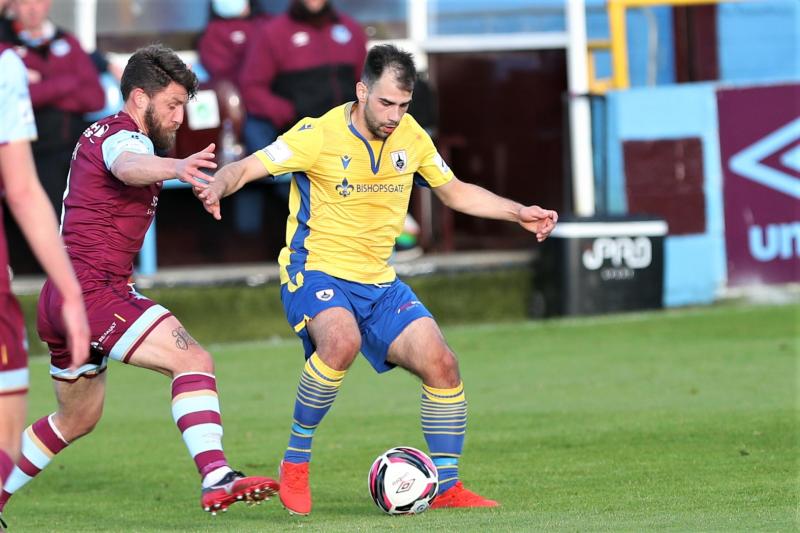 It’s becoming a bit repetitive at this stage but it was the same story in Head in the Game Park in Drogheda on Monday night. Longford Town’s inability to score goals and to not concede is a real problem.

Drogheda were full value for their win in the Premier Division clash but in the early exchanges of the second half Longford  upped their performance and pulled a goal back.

A lively opening but nothing real of note until the eighth minute when Chris Lyons’ header went wide. As the first half went on the home side began to get on top. Lyons had another chance in the 17th minute after Paddy Kirk did well to divert the ball out for a corner.

Ronan Murray took the corner but Lyons’ header just went wide. Darragh Markey squandered a good chance in the 27th minute while in the 33rd minute Dane Massey headed over the bar as Drogheda began to create chances.

Lyons tormented the Town defence and in the 35th minute the referee adjudged the striker was fouled and awarded a free-kick. Ronan Murray stepped up and curled the ball past Lee Steacy at the near post for the opening goal.

Drogheda doubled their lead in the 44th minute with Mark Doyle finding the back of the net; it was all too easy.

The home side had a few half chances at the start of the second half but in the 54th minute Longford  pulled a goal back. Callum Thompson did well to get to the endline and cross the ball and Aaron Dobbs found the back of the net.

Try as they might, the Town couldn’t get a second goal even though the introduction of Rob Manley made a huge difference. Surprising that he was dropped.

As Town went in search of the equaliser, they were exposed at the back with Drogheda substitute Jordan Adeyemo scoring twice in the closing minutes of the match.

Next up for Longford is a meeting with the reigning league champions Shamrock Rovers who are the visitors to Bishopsgate on Saturday next, kick-off 4pm.