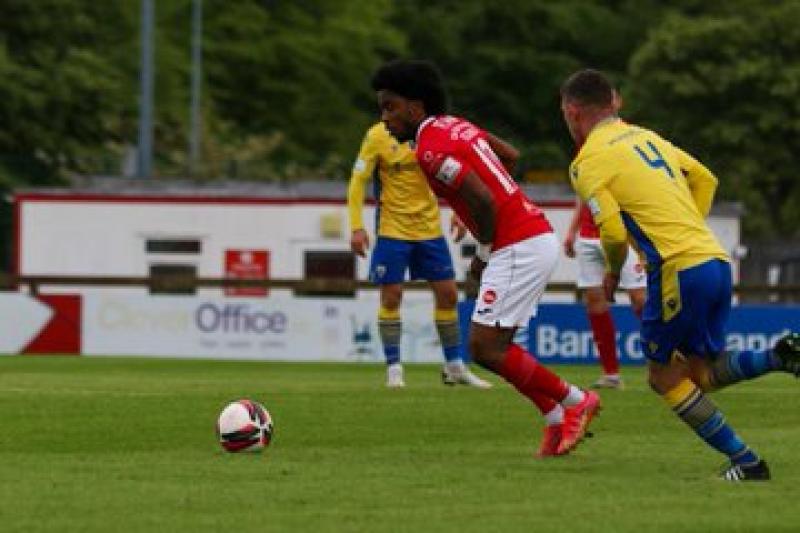 Longford Town fell to another defeat when goals in each half from Walter Figueira and a Jordan Gibson penalty earned Sligo Rovers all three points at the Showgrounds on Friday night to close the gap on Premier Division league leaders Shamrock Rovers.

Figueira’s goal came somewhat against the run of play on 17 minutes while the penalty that was awarded to Sligo in the second half was harsh, to say the least.

It was another performance where Town created chances but just couldn’t put them away. Their endeavour and battling qualities cannot  be faulted but these don’t win games or pick up points.

In some ways they are luckless. They’ve won just one game this season; at home to Derry City in the opening fixture at  Bishopsgate. They have performed very well in most games but conceding goals and not scoring has proven costly.

The Town are still second from bottom in the table. They are just one point ahead of bottom side Waterford and are now six points behind 8th placed Derry City.

It was Longford that started the game well and had the best chances in the opening quarter. On six minutes Rob Manley picked the ball up, turned and his shot just went over the bar. Minutes later Lewis Banks hit his shot straight at Town keeper Mick Kelly.

Dylan Grimes came close to breaking the deadlock on 12 minutes; Manley played the ball back to Grimes who shot first time and it went just inches over the bar.

The home side hadn’t threatened the Town defence but on 17 minutes they took the lead when Walter Figueira’s excellent strike from distance beat Kelly.

Sligo had a few half chances while down the other end Aaron Dobbs headed over the bar from a Grimes corner on 34 minutes and just before the break Sligo keeper Ed Ginty had to be alert from another Grimes corner.

There was nothing much to note in the early stages  of the second half but just before the half hour mark the home side were awarded a penalty. It appeared the ball bounced up and hit Paddy Kirk’s hand, it was definitely not deliberate but referee Ben Connolly pointed to the spot and Jordan Gibson converted  the spot-kick.

The Town tried to get back into the game and although they had several good passages of play their passing at times was short and they gave away the ball too cheaply.  Despite possession they failed to create anything that would trouble Ed McGinty in the Sligo goals.

A free-kick from Aodh Dervin was easily saved by the Sligo netminder and minutes later a Dylan Grimes free-kick was headed clear by John Mahon.

Jordan Gibson should have done better with his chance in the second minute of stoppage time while right at the end Romeo Parkes came close to grabbing a third goal for Sligo but his strike just whistled over the crossbar.

Next up for Longford Town is a trip to the north east to take on fourth placed Drogheda United.