Longford Town away to Sligo Rovers and Drogheda United 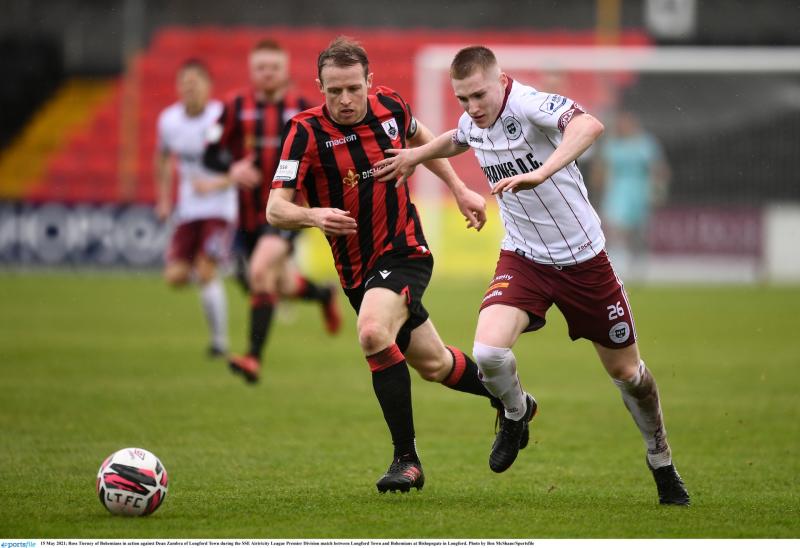 Ross Tierney on the attack for Bohemians in his bid to evade the challenge of Longford Town opponent Dean Zambra. Action from the game at Bishopsgate on Saturday last Photo: Ben McShane/Sportsfile

After drawing with Bohemians at Dalymount Park earlier in the season, there was a confidence that the Town were capable of getting a result against Keith Long's side but unlike the previous meeting between the teams in the Red and Black this was a completely different game.

Goals from Scottish imports Liam Burt and Ali Cooke clinched the victory for Bohemians and the result pushed them to sixth position in the table.

The defeat for Longford Town has left them second from bottom and three points behind Derry City who drew with Shamrock Rovers at Tallaght Stadium  on Saturday evening last.

After some sterling performances recently the game on Saturday night was a major disappointment for the Town.

We all appreciate that Daire Doyle has many players missing due to injury but he had four players return on Saturday and all were on the bench. Paddy Kirk, Aaron Dobbs, Sam Verdon and Conor Davis were back in contention and all were brought on during the second half of the game against Bohs.

Daire Doyle's hand was strengthened at the weekend and his team will need to start to pick up points immediately to move up from the bottom of the table, seeing that the bottom team Waterford have got a new manager who says he is promised cash to strengthen his squad in July.

St Pat's were surprisingly beaten 3-1 by Drogheda on Friday last, a win that puts the County Louth side  into  fourth place in the table.

When the teams met earlier in the season at Bishopsgate,  Sligo Rovers won 1-0 with the only goal of the game coming in the 47th minute when centre half Garry Buckley found the back of the Longford net.

The Town had their chances to get at least a draw  but the visitors stood firm with the experienced Greg Bolger dominating the midfield sector.

Keeper Ed McGinty is a very good netminder while  their defence is marshalled by Robbie McCourt and  Buckley but the latter is apparently suspended for the game against Longford.

Carrick-on-Shannon native Niall Morohan, who came through from the club's under-17s/19s, has made his position in midfield permanent due to some sterling performances since making his debut.

Like Morohan the other exciting prospect in the  Sligo team is Johnny Kenny who is only 17.

Romeo Parkes is back with the club this season  and he is a great professional. Jordan Gibson is a very lively winger who has scored a few great goals this season.

The much travelled Ryan De Vries and Walter Figuiera are experienced players who may not start but are influential when coming off the bench.

The Town will do well to take anything out of the Showgrounds as Sligo are a very well organised side.

Next up for Longford is a trip to the north east on Monday to play Tim Clancy's surprise packets Drogheda United who are currently fourth in the Premier Division table with 16 points from 11 games played.

When the teams met at Bishopsgate in the first series  of fixtures the visitors destroyed the Town with a 4-0 hammering.

It must be said that Drogheda manager Tim Clancy is doing a tremendous job up there.

It's interesting to note that his assistant is a  former Town player, Kevin Doherty, who was a commanding centre half when he played here.

Manager Clancy made some very shrewd signings during the off season, most notably Dave Massey who  joined from near neighbours Dundalk.

Former Town players Gary Deegan and Daniel O'Reilly are also performing admirably for the other Premier Division new boys. Deegan missed the 2007 FAI Cup Final for the Town due to suspension and he could have made the difference that day in the 1-0 defeat against Cork City.

Another interesting signing that Drogheda made was bringing in the experienced Dinny Corcoran who was surprisingly released by Bohemians at the end of last season.

Corcoran was on the bench on Friday night last as was big central defender Hugh Douglas who joined the club a few seasons ago from Bray Wanderers. Douglas has a habit of scoring against the Town as he did at Bishopsgate when the teams met in early April.

I don't think that Daire Doyle will need to give much of a pre match speech before the game in Drogheda as the embarrassment of that defeat at Bishopsgate will still be in the players minds.

As stated earlier, these two games over the weekend are  very important for Longford  who will have to pick up points to move  up the Premier Division  table.

It's a tough task against two of the form teams in the top flight who sit in third and fourth place and will be in a confident frame of mind.