Waterford Covid situation not good for the integrity of the league 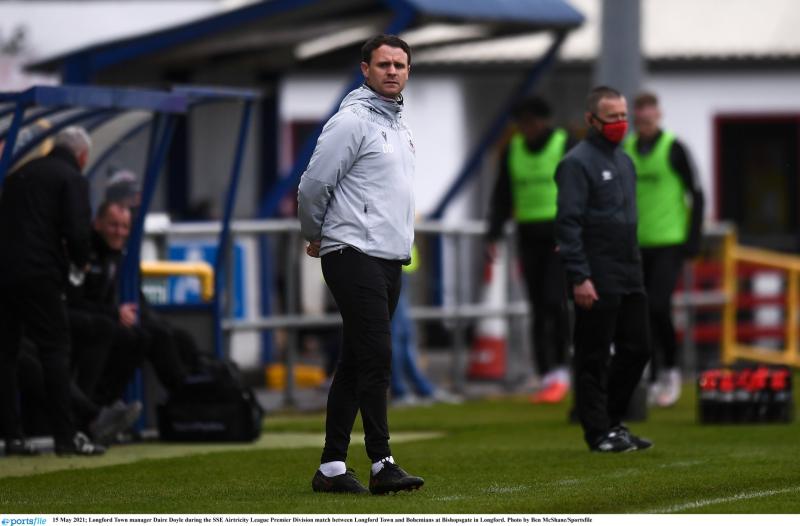 Longford Town manager Daire Doyle reflected back on the 2-0 defeat against Bohemians at Bishopsgate on Saturday evening last and admitted the visitors bossed the majority of the opening half-hour, but that their first goal came after a good passage of play from his side. He also thought that their second goal also came after a period of excellent Longford possession.

Doyle also said “There was no lack of effort from our group, no lack of commitment, the lads kept going right throughout, we definitely would have liked to have tested the keeper Talbot a little bit more”

Looking ahead to this Friday night’s game against Sligo Rovers at the Showgrounds, the Longford Town boss was asked about the Waterford Covid situation that resulted in the Blues having to field an under 19 team that lost seven-nil to Drogheda and then had to concede the scheduled weekend match against Sligo Rovers, and he agreed that it is not a good optic for the league.

“One hundred percent, listen we all know there was the participation agreement at the start of the season that all the clubs signed up to as regards the Covid situation, because last season, let’s be fair, I think one or two teams probably abused the Covid situation to get games called off.

“Then it came to it this year, we all knew we could register a larger squad, the FAI said that no games would be called off, but at the same time they did not expect a whole squad would be taken out of the equation which happened in this instance, that is the integrity then that you question about the league.”

Daire went on to say that he felt those two games against Drogheda and Sligo could have been postponed and played at a later date.

Finally, one other point Daire made was that he felt that having last week off may actually hinder Sligo Rovers momentum going into Friday’s match at the Showgrounds, and that also, as a result of the postponement, Sligo will now be missing centre-half Gary Buckley through suspension.