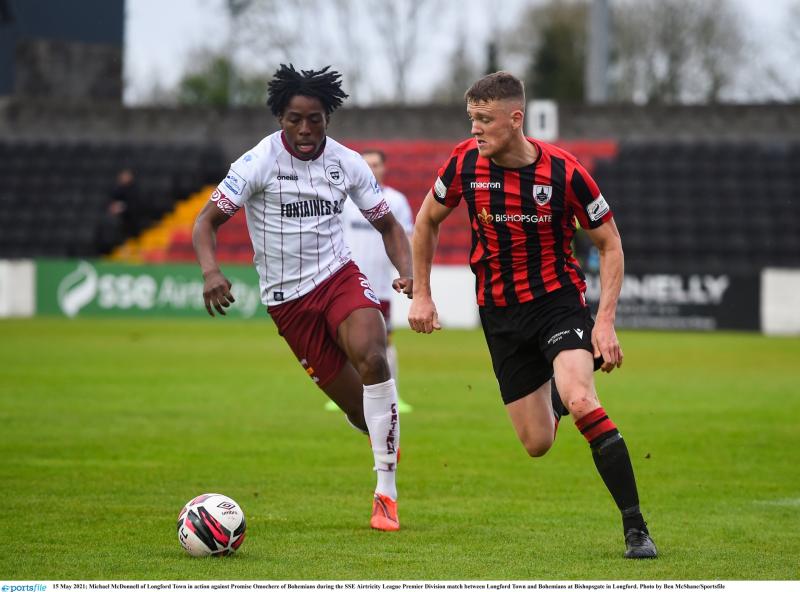 After two good results in the draws against Dundalk and Derry City, Longford Town fell to a disappointing defeat against Bohemians in the SSE Airtricity League Premier Division clash at Bishopsgate on Saturday evening.

Liam Burt and Ali Coote got the goals for the visitors with Burt breaking the deadlock just before the half hour mark. Despite having chances to increase the lead, Bohs had to wait until the 74th minute for their second goal to clinch the victory.

Conditions underfoot weren’t great with the rain making the pitch greasy. The opening exchanges were scrappy but as the game went on Bohemians started to get on top.

Tyreke Wilson had the first chance in the 25th minute but he floated his free-kick over the bar after Georgie Kelly was fouled.

Minutes later Ross Tierney came close to opening the scoring but his effort just went wide. Bohs took the lead in the 29th minute when Wilson set up Liam Burt and he found the back of the net with an excellent strike from just outside the box.

Dean Zambra shot over the bar in the 32nd minute but that was all Longford could muster up as Bohemians controlled the game.

Bohs started the second half in lively fashion with Georgie Kelly heading over from close range from a Burt ball in. In the 62nd minute a header from Georgie Kelly saw Town netminder Mick Kelly make a fantastic save.

Longford found the going tough and while Dylan Grimes had a free-kick in the 71st minute, it came to nothing.

One minute later James Finnerty headed over before Bohemians doubled their advantage in the 74th minute when Ali Coote pounced on a loose ball that the home side didn’t clear and he made no mistake in finding the back of the net.

Town substitute Aaron Robinson had a scoring opportunity in the 82nd minute but his effort from just outside the box went over the bar.