Watch Longford Town in action against Bohemians at Bishopsgate 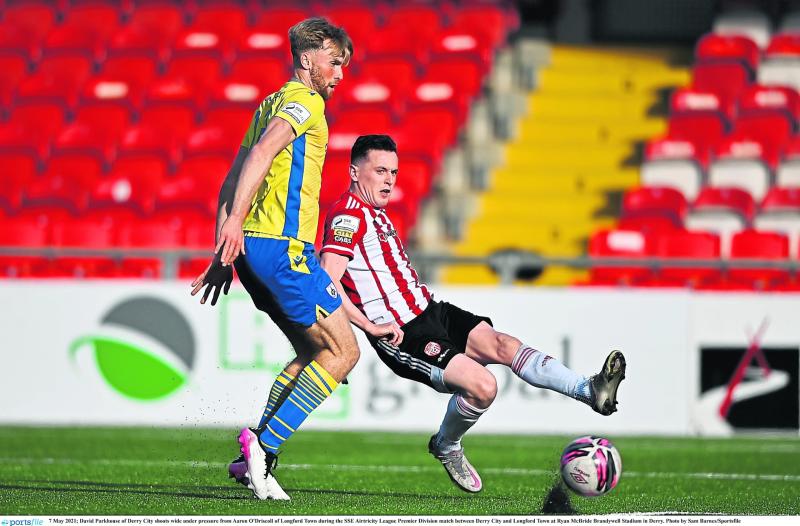 Longford Town are at home this Saturday when they welcome Bohemians to Bishopsgate with a 6pm kick-off.

As clubs cannot have fans in grounds at present, the only form of income at the moment is by fans streaming the game either by purchasing a season ticket or a 5 euro match day stream pass which really helps to support the clubs. Live on WATCHLOI.IE

Bohs boss Keith Long will come to Town with his team in a confident frame of mind after a very comprehensive 4-0 win over Ollie Horgan's Finn Harps in a game that the Donegal outfit will want to forget.

Looking at the highlights of the game and it would remind you of the Longford Town’s recent 4-0 defeat against Drogheda. Last season Bohemians were the only real challengers to Shamrock Rovers in the short season that saw Rovers move back to the top of Irish football, as it stands at the moment Rovers are sitting pretty on top of the table with St Pat's second and Sligo Rovers who beat Dundalk at Oriel Park on Friday sitting in third position.

Shamrock Rovers beat second in the table St Pat's 2-1 at Inchicore with the winning goal coming in added time.

That win put Rovers top on 26 points, St Pat's are second with 21 points and Sligo have 19. At the other end of the table Waterford who fielded an U-19 side against Drogheda lost 7-0.

The FAI League have a lot to answer by allowing Waterford to take such a decision because there was a Covid problem in their first team squad. It is very unfair to the other teams in the Premier Division that Drogheda got such a victory over the club's youngsters, especially helping their goal difference.

Waterford have 6 points, the Town 7 and Derry City 9, Dundalk surprisingly fourth from bottom on 10 points while Saturday night's visitors are on 11 points.

Young Ross Tierney gave Bohs their opening goal after 14 minutes and the former U-17, U-19 player has formed a good strike partnership alongside big George Kelly and those two will need to be closely watched on Saturday evening next. Tierney opened the scoring for Bohs but it was a new signing who got their goals both before half time.

Midfielder Ali Coote who only joined Bohs this season got his name on the score sheet twice before the half time break. His first goal came on 20 minutes while his second came just before half time as Bohs were in complete control.

Coote joined Bohs from Waterford after playing for them last season having previously played with Brentford. Team captain Buckley scored the 4th goal four minutes into injury time in the second half.

There is no doubt that there is lots of talent in this Bohs team but they are beatable. When the teams met in Dalymount Park back in the end of March the Town came away with a very valuable point from a 2-2 draw.

New signing from Dundalk Georgie Kelly gave Bohs the lead on 20 minutes. Just six minutes later Bohs went two up when Lee Stacey made an excellent save from a Burt blockbuster but Tierney added number two almost immediately when he punished hesitancy in the Town defence.

At this stage it looked as if this could have been a rout but the Town dug in and started to get into the game.

Conor Davis replaced Dean Byrne in the 70 minute and he was the Town hero with two goals in the 76 and 88 minutes to get the Town a share of the points. Actually the Town were in complete control at the end of the game and could have stolen all three points but  this was a fantastic point.

The Bohemians team had a very bad start to this year's campaign with 11 points from 10 games played. Their record to date is three wins, two draws and five defeats, they have scored and conceded 12 goals to date.

The Town have drawn their last two games against Dundalk and Derry City and we could have and should have won both games.

Giving away late goals is a problem for manager Doyle, but he has suffered a lot from injuries, as the bench against Derry included four players who are eligible for our U-19s and that is good for the club to see players coming through.

Manager Doyle must be sweating on the fitness of some of the experienced players and with double games coming up soon again, it will be a testing time for the club's management.

The return of club captain Dean Zambra has made a huge difference in the midfield, while the return of Dean Byrne is also a great boost for Daire Doyle. Bohs are beatable as their record of five defeats to date in ten games shows and we could take points from Saturday's clash of the Red and Black.

Longford Town boss Daire Doyle has informed James Donnelly, the club’s operations & media manager, that Paddy Kirk is available for team selection this weekend against Bohemians, after recovering from a knock he picked up a couple of weeks ago.

Aaron Dobbs, Sam Verdon and Conor Davis are still doubtful. Aaron McNally is out (ankle), Aaron McCabe is out with a knock, and Callum Warfield is still another few weeks away after the injury he picked up in April.