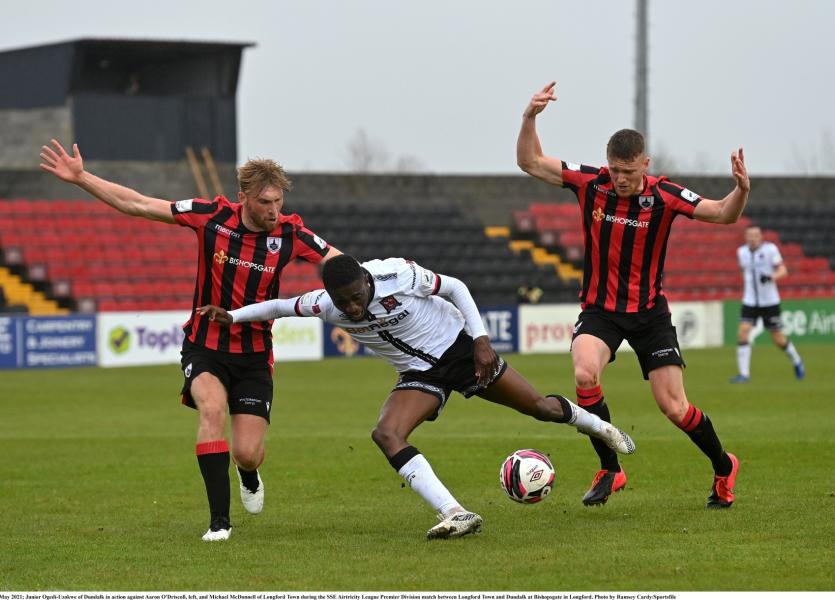 Junior Ogedi-Uzokwe on the attack for Dundalk in this tussle with Longford Town defenders Aaron O'Driscoll (left) and Mick McDonnell. Action from the game at Bishopsgate Pic: Ramsey Cardy/Sportsfile

A point gained might be the best way to describe the surprise draw against Dundalk at a bitterly cold Bishopsgate on Monday evening last but revitalised Longford Town must be wondering what might have been in going so close to scoring a shock win.

Showing great character, the gutsy home side were hanging on to a 2-1 lead with time running out when a mistake in the Dundalk defence presented Dean Byrne with a great chance of grabbing a killer third goal in the 81st minute but his shot was blocked down and the danger was cleared.

Moments later the Town suffered a sickening blow when Dundalk’s midfield anchorman Chris Shields planted a well struck low shot into the corner of the net but Longford stood firm during the remainder of the match and a draw was the least they deserved.

A dream start paved the way for a precious point in a highly entertaining SSE Airtricity League Premier Division clash as Longford capitalised on two terrible mistakes by the opposing keeper Peter Cherrie.

Goals were gifted to Dylan Grimes and Rob Manley in the 6th and 14th minutes respectively, bringing a frustrating scoring drought to a sudden halt and a rapid response to the defeat against St Patrick’s Athletic at Richmond Park the previous Friday evening.

Just a solitary goal in the previous six games, a penalty against Shamrock Rovers, was causing considerable concern for Town manager Daire Doyle who also had to deal with some more injury problems with Paddy Kirk and Aaron Dobbs ruled out of the game against Dundalk.

Also absent from the squad on Monday were Joe Gorman and Sam Verdon and it seemed  like Longford were facing a real uphill battle against the might of a very strong Dundalk team, despite a poor start to the season by their high standards.

Much has been made about the current managerial problems at the Co Louth club and they looked like a team in disarray when they fell 2-0 behind in calamity fashion due to the horrendous errors committed by their shaky keeper Cherrie.

While Dundalk got right back into contention when striker Junior Ogedi-Uzokwe hit the target from close range with 20 minutes gone on the clock, the visitors had to sweat it out before the equaliser eventually materialised late in the game.

On the evidence of their excellent first half performance, in particular, the Town are capable of getting out of relegation trouble and created a number of other good chances during the course of the match in really putting it up to Dundalk.

Dylan Grimes, always a threat, could hardly believe it when his speculative shot somehow evaded the grasp of Cherrie as the ball ended up in the net.

And there was even more early woe for the Dundalk netminder when he fumbled a cross from Karl Chambers with the alert Rob Manley pouncing on the breaking ball to score the second goal for Longford after just 14 minutes.

Back came Dundalk with a rather soft goal from Junior, who got the vital touch from a header from Andy Boyle after Michael Duffy fired a corner into the box.

Almost immediately, Aaron Robinson had a cracking goal attempt deflected out for a corner in a swift Longford counter-attack and the overall workrate produced by the home side was generally immense.

After Sean Murray almost got the visitors back on level terms in the 35th minute, the impressive Dean Byrne went close to restoring the two goal advantage for Longford sixty seconds later when he was narrowly off target from a fine strike.

And right at the start of the second half there was some redemption for Cherrie when he produced a great point-blank save to stop Rob Manley from scoring again and a third goal for Longford would surely have yielded a famous victory.

Dundalk gradually got on top and a couple of glorious chances were squandered by Junior and substitute Ole Erik Midtskogen before Chris Shields came to the rescue to fire home the second goal in the closing stages of a most exciting game.

And there  was one last opportunity for Dundalk to grab a dramatic winner but the dangerman Michael Duffy failed to make firm contact with the ball in shooting straight at Longford keeper Michael Kelly in the 84th minute.

This very positive result takes the Town off the bottom of the table, ahead of Waterford on goal difference, and Daire Doyle’s side have got a timely confidence boost for the next fixture away to Derry City this Friday evening, kick-off 5.45pm.