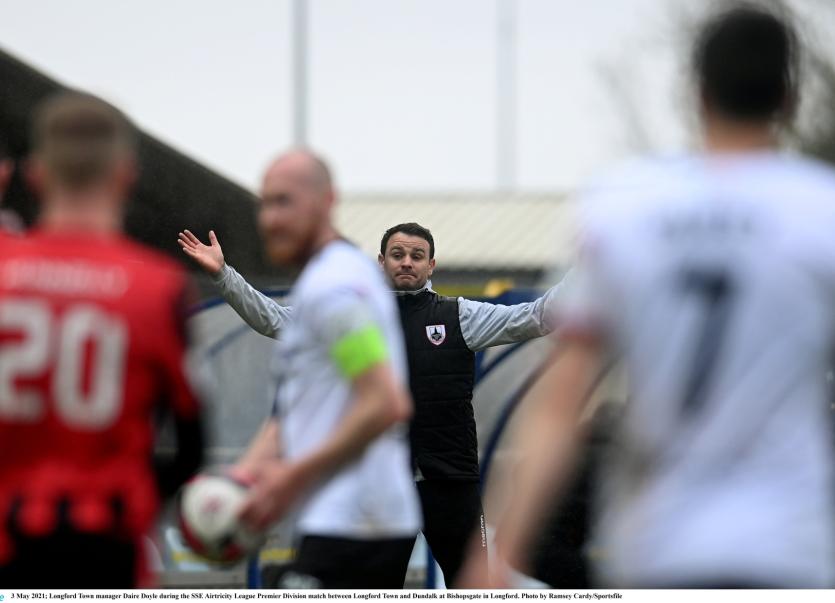 Although delighted with his side’s performance in the draw against Dundalk at Bishopsgate on Monday evening last, Longford Town manager Daire Doyle felt they deserved the three points. The Town were 2-0 up in the early stages  of the game but Dundalk came back to snatch a point.

Doyle said: “It was a performance that merited the three points. We got a little bit of luck going our way early on in the game with the first goal; we’ve had a few of them go against us in previous weeks. So it’s nice to go our way on this occasion.

“It was a fantastic performance from every player; we had a number of players come in because we got about eight injuries at the moment.

“I spoke about the depth we have in the group and you look at the team I was able to put out there today; it’s as strong as any team we have fielded this season.

“It was great to see Dean Byrne come in and Dean Zambra also back. What’s really pleasing is that someone like Mick McDonnell and Shane Elworthy getting their first starts in the positions they’ve probably made their own at this club.”

Longford Town created several chances throughout the game. Doyle pinpointed two in the second half that could have sealed the win for his side.

“The start to the second half Rob (Manley) has a chance to score within the first minute. If that goes in we are 3-1 up and they’re chasing the game then. They’re the little margins.

“A chance fell to Dean Byrne late in the game and that was probably 90 seconds before they scored the equaliser. So if we’d managed to take that chance we would surely have won. Dean was brilliant for us.”

It was the perfect response from the Town after the disappointment of losing to St Pat’s on Friday after putting in an excellent first half performance. Mistakes lately have proved costly for Doyle’s side.

He said: “We’ve had strong performances. We are disappointed that a mistake did us in Waterford.

“We are disappointed that mistakes also cost us against St Pat’s because we were the better side for large periods of the game. The scoreline didn’t reflect our performance.”

Longford Town are away to Derry City on Friday evening and after defeating the Candystripes in the opening game of the season, the boss Doyle is hoping for a repeat performance at Ryan McBride Brandywell Stadium.

“Obviously Ruaidhri (Higgins) has come in and they’ve had a good couple of good results. You are going to get that little bounce from a squad.

“They didn’t have a good start to the season. There is no hiding from that. He has got a reaction from the group. I’m sure they will look at what we’ve done to them in the previous meeting and feel they have a point to prove. We are no different.”

“We say to the lads every single week, we are here in this Premier Division and we need to prove a point because if we don’t we won’t continue to be here.

“What we do have is a group that believe in what we want. We belong in the top flight. We believe we can put in the performances and get the results to achieve that aim,” stated the defiant Doyle