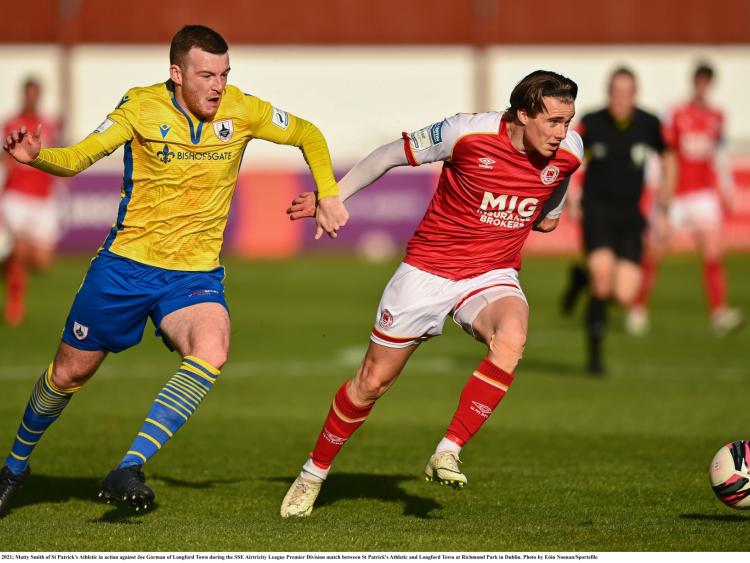 Matty Smith on the attack for St Pat's in breaking away from Longford Town defender Joe Gorman. Action from the game at Richmond Park on Friday evening Photo: Eóin Noonan/Sportsfile

Longford Town slumped to their fifth defeat of the season as three second half goals at Richmond Park on Friday evening saw St Patrick’s Athletic extend their impressive unbeaten run at the top of the Airtricity League Premier Division.

Defensive frailties and not able to create or put away chances were yet again the story of the game for Longford.

St Pat’s first goal was a poor one to concede and could have been avoided but their second was a superb strike from Chris Forrester and he got another goal in injury-time.

In a poor first half, chances were scarce. Both sides had one opportunity apiece while there were a few half chances. Neither keeper had to make a save of note in the first 45 minutes. The Town battled throughout the first half and put plenty of pressure on Pat’s.

In the 12th minute St Pat’s defender Sam Bone got into a decent position but he shot over the bar. Longford went down the other end and Aaron Dobbs hit a shot from just outside the box but St Pat’s keeper Vitezslav Jaros was able to gather the ball.

A chance fell to Dobbs in the 31st minute but he dragged his effort wide when he should have done better. Chris Forrester hit a shot minutes later which Town keeper Michael Kelly got down to save.

Two minutes into the second half the home side broke the deadlock; a cross from Darragh Burns was turned into the net at the far post by substitute Ronan Coughlan. The Town had a chance minutes later but Karl Chambers headed over from close range.

St Pat’s doubled their lead in the 52nd minute; Coughlan passed the ball to Chris Forrester and he curled a terrific effort into the top corner of the net.

The Town tried hard to get back into the game but Pat’s were content to sit back and soak up the pressure. Dean Byrne put in a perfect cross in the 86th minute but it went inches wide with Rob Manley unable to connect with the ball.

Forrester got his second and St Pat’s third goal in the second minute of injury time with a  fine finish to seal the emphatic victory.