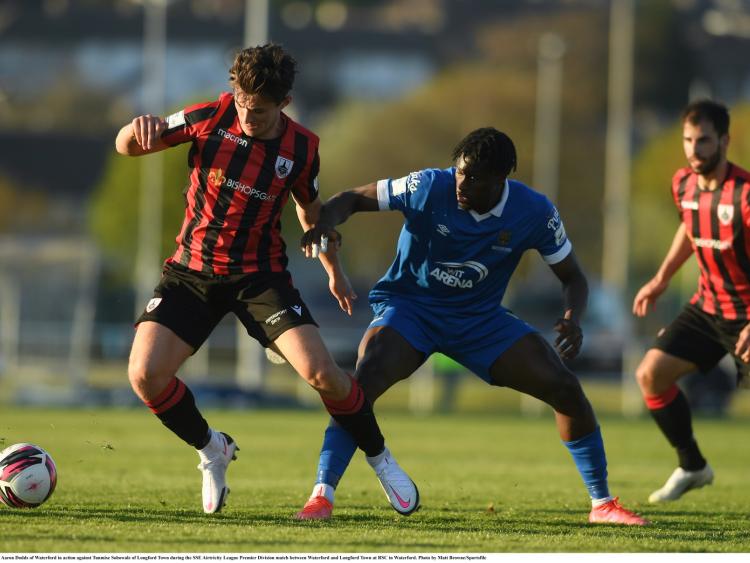 Aaron Dobbs on the ball for Longford Town in evading the challenge of Waterford opponent Tunmise Sobowale. Action from the league game at the RSC on Saturday last Pic: Matt Browne/Sportsfile

Reeling from the major disappointment of the 1-0 defeat against Waterford on Saturday last, Longford Town are facing a couple of very difficult fixtures over the May Bank Holiday weekend.

First up is the clash against the current Premier Division leaders St Patrick’s Athletic at Richmond Park this Friday evening, kick-off 5.45pm.

Then Dundalk are the visitors to Bishopsgate on Monday evening next (kick-off 5.45pm) and it must be said that the Town will be hard pressed to pick up any points in those two games.

By virtue of their win over Longford,  troubled Waterford have moved ahead of the midlanders in the table as have Dundalk who beat Co Louth rivals Drogheda last weekend to register their first victory in the league this season.

At the moment the Town are stuck on five points alongside Derry City at the bottom end of the table and the clubs clash at Ryan McBride Brandywell Stadium on Friday night week, the start of the second series of fixtures.

Derry, under new manager Ruaidhri Higgins, got their first victory in the current campaign when they beat Sligo Rovers 1-0 at the Showgrounds last Saturday.

Reflecting back to Longford’s costly setback against Waterford, the Town dominated the game for long periods but left the RSC with nothing.

The only goal materialised in the early stages of this crucial clash as a mistake in the Longford defence was punished.

While Waterford were down to ten men after defender Kyle Ferguson was sent-off in the 61st minute, they stuck it out to collect all three vital points with Longford again showing a lack of penetration in attack.

Last season young Aaron McCabe was sprung from the bench to score some important goals as the Town made it through to the play-offs so why not give him a chance with his knack of finding the back of the net.

St Pat’s are flying at the moment under the management of former Dundalk player Stephen O’Donnell and ex-Longford boss Alan Mathews.

To date, the Dublin club have 17 points from seven games, the same total as the reigning league champions Shamrock Rovers.

St Pat’s are top of the table on goal difference with wins over Finn Harps, Waterford, Derry, Bohemians and Drogheda along with draws against Rovers and Dundalk.

Keeper Vitezslav Jaros, who is from the Czech Republic, is on loan from Liverpool and is a top class shot stopper.

The talented playmaker Chris Forrester, who was with Aberdeen and Peterborough, is a class act with former Dundalk player John Moutney another key figure in the midfield sector.

Former Sligo Rovers player Ronan Coughlan is a dangerman with his ability to score vital goals while the Town defence will also need to keep a very close watch on Billy King (ex-Dundee United) and Matty Smith (ex-Waterford).

Robbie Benson, who previously played with Dundalk, missed the 2-0 win over Finn Harps last weekend and he is a potential matchwinner for St Pat’s

Hopefully, the Town can bounce back from the defeat at the RSC and manager Daire Doyle could have some of the injured players back for the visit to the Inchicore grounds on Friday evening.