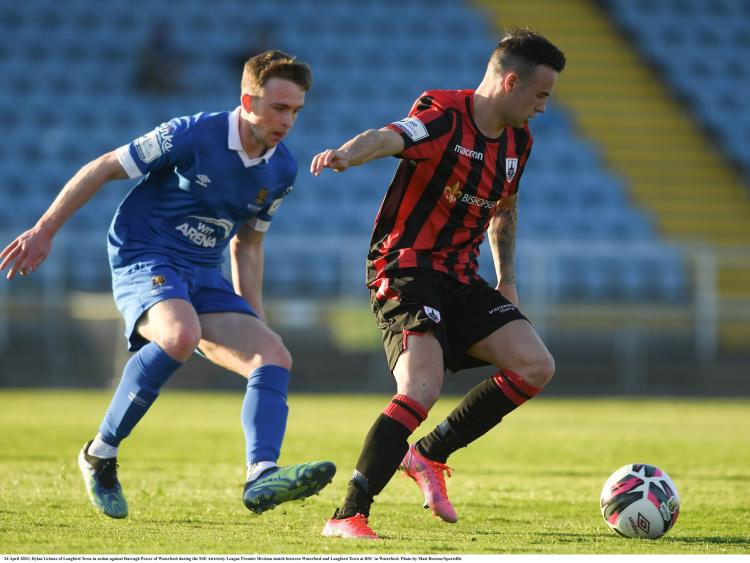 Longford Town crashed to a disappointing defeat against 10 men Waterford in the SSE Airtricity League Premier Division Round 7 clash at the RSC on Saturday evening.

The only goal of the game came from a mistake in the 9th minute with Prince Mutswunguma firing the ball past Town keeper Michael Kelly.

Waterford had Kyle Ferguson sent off in the 61st minute and despite numerical advantage and a lot of possession, the Town couldn’t find a way back into the game.

Longford’s inability to put away chances was evident again. In the last five games the Town have only scored one goal; a penalty against Shamrock Rovers. Their first half performance was poor and littered with a lot of mistakes.

Waterford broke the deadlock with the first chance of the game. Prince Mutswunguma charged down Joe Gorman’s clearance and nicked the ball from him and was able to go straight through on goal and shoot past the advancing Town keeper Michael Kelly.

Longford made mistakes in the first half and their passing was sloppy at times. Their first effort came in the 16th minute; Rob Manley tried to chip Waterford keeper Paul Martin but the netminder was able to get a hand to the ball to clear the danger.

Waterford tried to charge down and block clearances in the Town’s defence in the hope of getting a second goal. Down the other end Rob Manley headed wide from a Dylan Grimes corner in the 26th minute. Two minutes later a Grimes free-kick met the head of Aaron O’Driscoll but the ball got a deflection out for a corner.

Right before the break Mutswunguma squandered a glorious opportunity to get his and his side’s second goal for Waterford. The ball was played to him by John Martin but he somehow curled his shot wide when it was easier to score.

Waterford were reduced to 10 men in the 61st minute when Kyle Ferguson was shown a straight red for an elbow challenge. One minute later the Town had the ball in the back of the net but Joe Gorman’s header was ruled out for offside.

Longford pressed for the equaliser and in the 71st minute Gorman again had a chance but his header was straight at Waterford keeper Martin.

In the 80th minute Cameron Evans cleared Sam Verdon’s effort off the line as Waterford battled to consolidate their lead on their way to picking up three very valuable points.