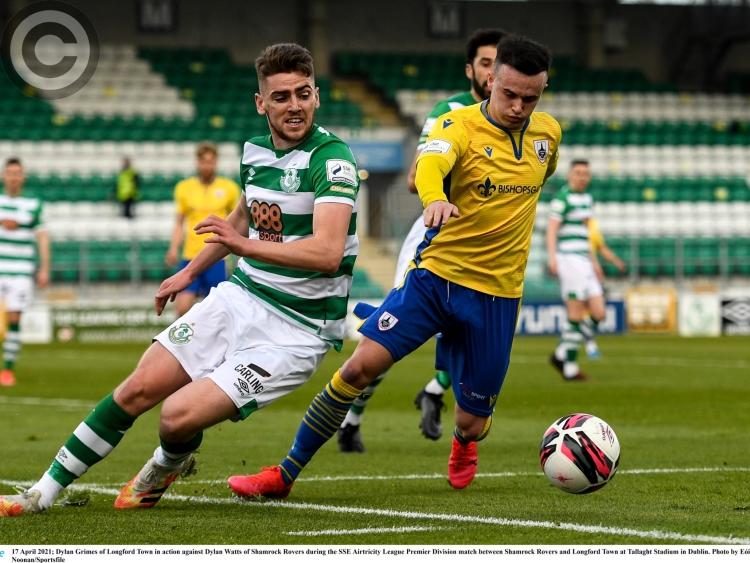 Dylan Grimes on the ball for Longford Town in breaking away from Shamrock Rovers opponent Dylan Watts. Action from the game at Tallaght Stadium on Saturday last Pic: Eóin Noonan/Sportsfile

Following their terrific performance in the so unlucky 2-1 defeat against the current league champions Shamrock Rovers at Tallaght Stadium, Longford Town are back in action against Finn Harps at Bishopsgate this Tuesday evening, kick-off 7.45pm.

Rovers scored the winning goal in the third minute of stoppage time to snatch a last gasp victory on Saturday and while it was a shattering blow for the midlanders, the target will be to pick up at least a point against the Donegal club.

Generally regarded as a physically strong side, Finn Harps have won at home to Bohemians and Waterford and sprang a big surprise when beating Dundalk at Oriel Park.

The Donegal club drew with Drogheda and it must be said that their inspirational manager Ollie Horgan continues to do a wonderful job, despite suffering a rather unfortunate first defeat (1-0) against Sligo Rovers at the Showgrounds last Saturday.

Harps may have been at the wrong end of the table for most of last season but were really competitive, something we have come to expect from the players under the driving force of the boss Horgan.

One of the main reasons for their great start to the current campaign is their tight defence. Mark McGinley is a very competent keeper while the back four are a formidable outfit.

There is an abundance of experience in the Finn Harps defence with ex-Linfield and Shamrock Rovers player Ethan Boyle alongside the club captain Dave Webster, two great players.

Other key men in the strong Harps squad are former Derry City player Shane McElaney and Kosovar Sadiki who is on loan from Scottish Premier Division club Hibernian.

Another former Derry player Barry McNamee will also be in action for Harps along with Will Seymour (ex-Sligo Rovers) but their real star this season is Adam Foley (ex-Newry) who has scored four goals already and is a serious threat.

There is no doubt that Finn Harps, as is the norm, will be a tough nut to crack but Longford Town are capable of getting a positive result at Bishopsgate Stadium.