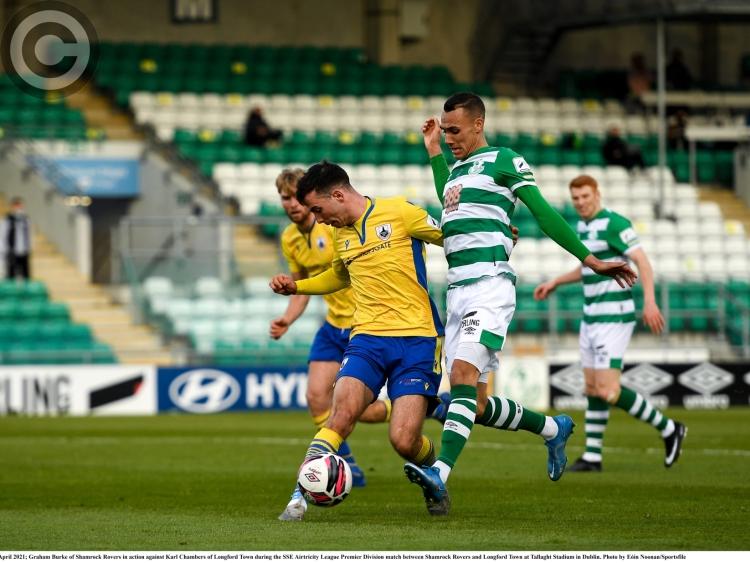 Karl Chambers on the ball for Longford Town in this tussle with Shamrock Rovers opponent Graham Burke. Action from the Premier Division game at Tallaght Stadium Photo: Eóin Noonan/Sportsfile

It was tough on the Town who had played so well throughout. They had taken the lead in the seventh minute through a Dylan Grimes penalty. Rovers were on level terms in the 58th minute; a penalty decision that seemed harsh on the Town and the players questioned referee Rob Hennessy’s decision to award the spot kick.

Six minutes had gone on the clock when Roberto Lopes was caught out and brought Aaron Dobbs down in the box. Dylan Grimes stepped up and sent the Rovers keeper Alan Mannus the wrong way as his penalty nestled in the bottom right hand corner of the net.

Shamrock Rovers tried to get back into the game and played some good football but the Town were solid in defence. In the 19th minute Graham Burke had a chance but it was easy for keeper Michael Kelly to get down to make the save.

The home side had plenty of the ball but weren’t creating chances to trouble the Longford keeper Kelly. Down the other end in the 37th minute Aaron Robinson had a shot for the Town that was deflected out for a corner.

Aaron Bolger and Grimes both got vital touches on the ball as Rovers pressed for the goal to get them back on level terms. In the 43rd minute Sean Kavanagh’s shot from distance went just over the bar while in first half stoppage time Aaron Greene’s header was weak and directed right into the arms of Kelly.

Just inside the opening minute of the second half Chris McCann brought a very good save out of Town keeper Kelly. Rovers were on level terms in the 54th minute when Graham Burke scored from the penalty spot.

Burke had a free-kick minutes later but Kelly was able to get down to save. Town then had two great chances; Aaron Robinson’s excellent strike was tipped over the crossbar by Rovers keeper Alan Mannus in the 64th minute and three minutes later Karl Chambers’ effort just went over.

Rory Gaffney and Graham Burke squandered chances as the home side piled on the pressure as they tried to get a second goal. As the clock ticked down Rovers enjoyed possession but didn’t do too much to trouble the Town defence.

Dylan Watts brought a save out of Town keeper Kelly in stoppage time but there was still time for late drama as Rovers snatched victory right at the end through Sean Gannon.