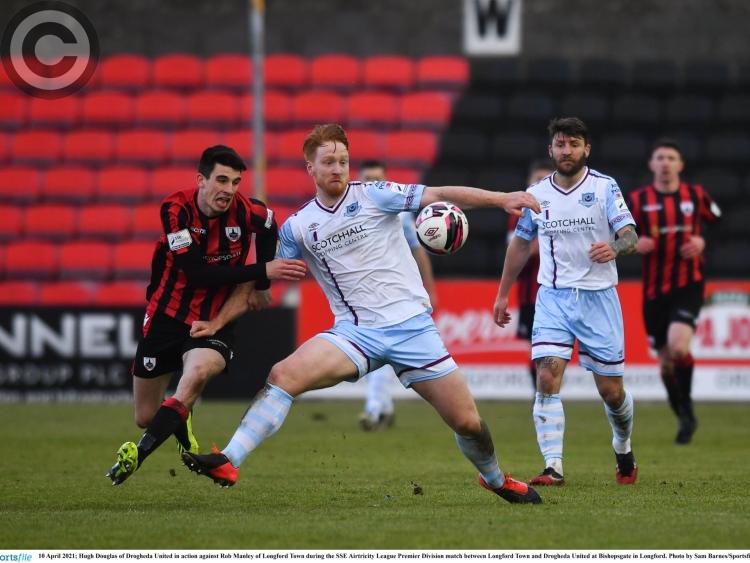 Life in the top flight was always going to be extremely tough for Longford Town and some costly mistakes were punished in a harsh lesson learned at Bishopsgate on Saturday evening last.

Clinical Drogheda United capitalised on some very slack defending by the home side to score four goals in a ruthless display and Longford manager Daire Doyle does not need to be told that a number of problems need to be sorted out soon.

It all went wrong for Longford Town as they crashed to a heavy defeat in Round 4 of the SSE Airtricity League Premier Division but ironically it might have been a different story had the midlanders managed to score in the first half.

Rob Manley, back in the team after recovering from injury, squandered a great chance from close range after the ball broke at his feet in the 5th minute while the dangerous Dylan Grimes went close with no less than three goal attempts.

Grimes shot narrowly wide in the 21st minute and soon after he drove a cracking long range effort just over the bar.

And just before the break the pacey Town attacker almost got the goal his  impressive performance deserved when his strike was well saved by the competent Drogheda keeper Colin McCabe.

Drogheda broke the deadlock in the 35th minute when Mark Doyle finished the ball to the net from close range after Longford netminder Lee Steacy produced a fine reflex save to keep out a goal effort from the other United striker Chris Lyons.

This deadly duo posed a lot of problems for the Town defence and Doyle -  put clean through by Lyons - had a glorious opportunity of scoring a second goal for Drogheda in first half stoppage time, only to have his point-blank shot well saved by Steacy.

Longford fell further behind in the 52nd minute when the completely stranded Steacy failed to deal with a right wing cross from James Brown as the unchallenged Lyons finished the ball to the net for a real opportunist goal.

While Drogheda keeper McCabe then came to the rescue when making a save right on the goal line in the 56th minute, the opinion in this Town attack was that the ball had apparently  crossed the line after Grimes had fired a corner into the box.

It was a very lucky escape for Drogheda as Longford were denied the opportunity to get back into contention and it was just not to be in a game they will want to forget in a hurry.

Things went from bad to worse moments later when a terrific cross from Conor Kane connected with the head of Mark Doyle who directed the ball into the net from a few yards out in the 57th minute.

It must be said that Longford were no match for the much sharper Drogheda side in the second half and the Co Louth club are considerably stronger this season with the vastly experienced Gary Deegan a vital cog in the midfield sector.

Longford created a couple of chances on the changeover with Rob Manley knocking a header over the bar in the 65th minute while substitute Aaron Robinson shot just wide of the post from a cracking long range strike in the closing stages of the match.

Such a demoralising defeat against Drogheda was hard to take and was not a true reflection of Longford’s actual ability with injuries ruling out Dean Zambra, Dean Byrne and Callum Warfield.

Next up for the Town is a daunting task against last year’s league champions Shamrock Rovers at Tallaght Stadium this Saturday evening, kick-off 6pm.