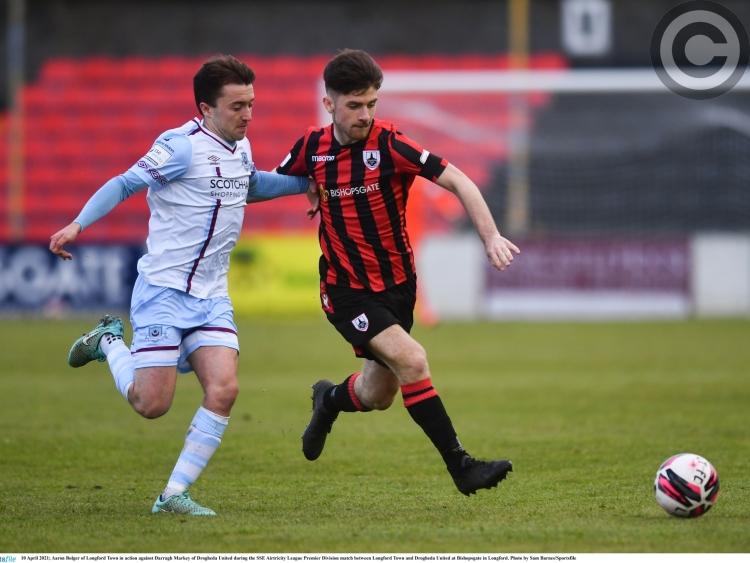 It all went wrong for Longford Town at Bishopsgate on Saturday evening as they crashed to a heavy defeat against Drogheda United in Round 4 of the SSE Airtricity League Premier Division.

The clash of the promoted clubs was expected to produce a close encounter and while the dangerous Dylan Grimes went close with no less than three goal attempts for the home side in the first half, it was the visitors who ended up in front at the break.

Drogheda broke the deadlock in the 35th minute when Mark Doyle finished the ball to the net from close range after Longford keeper Lee Steacy parried a goal effort from the other United striker Chris Lyons.

This deadly duo posed a lot of problems for the Town defence and Doyle - set up by Lyons - had a glorious opportunity of scoring a second goal for Drogheda in first half stoppage time, only to have his point-blank shot well saved by Steacy.

Longford fell further behind in the 52nd minute when the completely stranded Steacy failed to deal with a right wing cross from James Brown as the unchallenged Lyons finished the ball to the net.

While Drogheda keeper Colin McCabe then came to the rescue when making a save right on the goal line in the 56th minute, the opinion in this Town attack was that the ball had apparently crossed the line after Grimes had fired a corner into the box.

It was a very lucky escape for Drogheda as Longford were denied the opportunity to get back into the game. Things went from bad to worse moments later when a terrific cross from Conor Kane connected with the head of Mark Doyle who directed the ball into the net from a few yards out.

The tale of woe for the Town was complete in the 68th minute when Drogheda defender Hugh Douglas was on target from a firmly struck header following a Ronan Murray free-kick floated into the box.

Such a demoralising defeat was hard to take and Longford will need to recover quickly for their next game in the top flight against last year’s league champions Shamrock Rovers at Tallaght Stadium next Saturday evening.