Longford Town bid to get back on track against Drogheda United 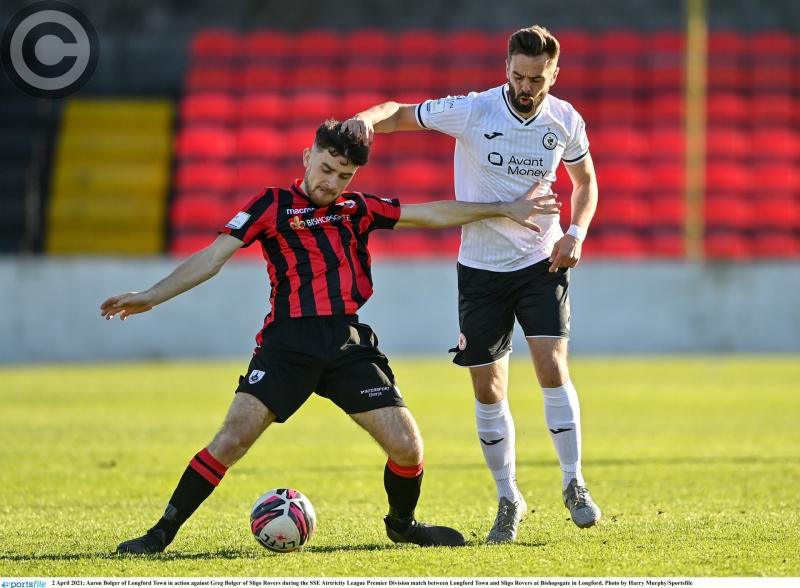 Battle of the Bolgers . . Aaron Bolger on the ball for Longford Town in his bid to evade the challenge of Sligo opponent Greg Bolger. Action from the game at Bishopsgate Pic: Harry Murphy/Sportsfile

It’s the clash of the newly promoted clubs, Longford Town and Drogheda United, at Bishopsgate this Saturday evening (kick-off 6pm) and Daire Doyle’s side will be hoping to bounce back from the disappointment of the defeat against Sligo Rovers over the Easter weekend.

The Town are currently in fourth position in the table, alongside Shamrock Rovers (who have a game in hand against Derry) and Drogheda, and the boys in red and black will be seeking a good result against last year’s First Division league champions.

Drogheda United made a great start on their return to the top flight with a 1-0 home win over Waterford and were then most unfortunate to lose 2-1 against St Patrick’s Athletic who snatched a late winner at Richmond Park.

Last Saturday Drogheda were at home to Finn Harps and the match ended in a 1-1 draw which, by all accounts, was the fairest result.

The Drogheda manager Tim Clancy will be happy with the start his side have made and they will be coming to Bishopsgate in the firm belief that they will get something out of the crucial game against Longford Town.

Over the last few seasons the matches between the teams in the First Division were all close encounters and it could be more of the same on Saturday with a draw the possible outcome.

Drogheda have been busy bringing in new players and there is no doubt that Tim Clancy did his homework well in making some very shrewd signings.

Gary Deegan, who played with Cambridge United, Hibs in Scotland and Coventry, is a physically strong midfielder who joined Drogheda from relegated Shelbourne.

Deegan missed the promotion/relegation play-off against Longford last November due to suspension and it was the same case when he was ruled out of the 2007 FAI Cup Final against Cork City when he was a Town player.

Former Dundalk player Dane Massey is another big signing and his experience both in the Premier Division and in Europe is a valuable asset for his new club Drogheda.

Former Town defender Daniel O’Reilly has also signed for Drogheda, after previously playing with Finn Harps, while back at the Co Louth club is striker Dinny Corcoran who has also played with Bohemians, St Patrick’s Athletic, Sligo and UCD.

Corcoran is a very good player, who featured prominently for Drogheda in 2011 and will need to be watched very closely indeed by the Longford defence.

His vast experience will be a big help to fellow attacker Mark Doyle and this duo are well capable of scoring vital goals for Drogheda this season.

Conor Kane, who has been at the club since 2016, is a top defender while former Shels player James Brown was apparently the man of the match in the draw against Finn Harps.

Towering defender Hugh Douglas moved to Drogheda from Bray a few seasons ago and he is a commanding presence who is dangerous in the set piece situations.

Other players to watch out for in the Drogheda team are Jake Hyland and Ronan Murray, along with Chris Lyons, while ex-Cabinteely defender Jack Tuite is also part of the strong United squad.

Former Sligo Rovers player Murray is a potential matchwinner while a number of promising young players have graduated to the Drogheda senior side from the U-19s.

Looking back on Longford’s 1-0 defeat against Sligo Rovers on Good Friday, there is no doubt that Daire Doyle’s totally committed side deserved at least a draw.

The clash against Drogheda is a good opportunity for the Town to get back on track but every single game in the so competitive Premier Division is going to be extremely tough.