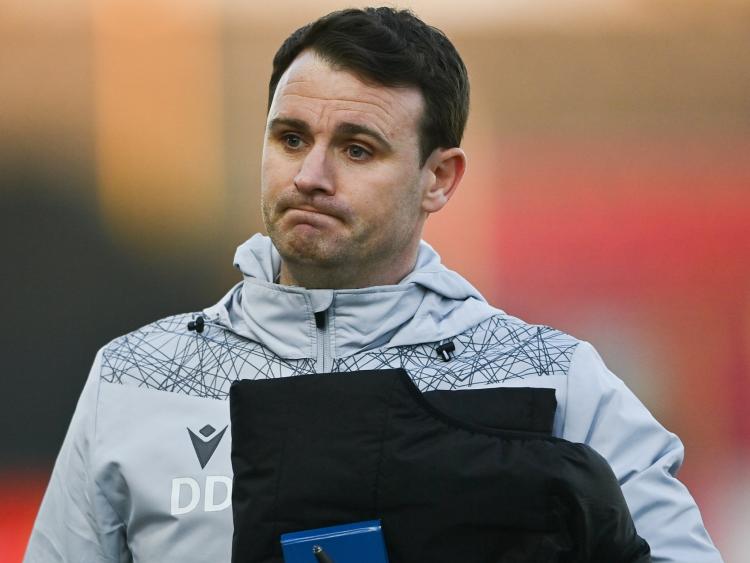 Longford Town boss Daire Doyle said his side were unlucky not to have got something out of their game against Sligo Rovers at Bishopsgate Stadium on Friday evening last.

Garry Buckley’s goal in the 47th minute proved to be the difference between the sides as the Town fell to their first defeat of the season.

Doyle said: “I definitely think we should have got something out of the game; we were unlucky not to have earned at least a draw.

“Had a couple of decisions gone our way, we possibly would have got a positive result.  We don’t get anything for a moral victory. We put it up to them.

“We had a really strong performance yet again. We came up against a good Sligo team who are expected to be there or thereabouts this season.”

Clear-cut chances were scarce with neither keeper forced into making many saves. Town netminder Lee Steacy made the best save of the game from exciting young Sligo star Johnny Kenny in the closing stages of  the first half.

The Town boss said: “It was probably a game of few chances where neither keeper had a whole lot to do.

“Lee made a really good save in the first half. Aodh is unlucky late in the second half, was it going in? I don’t know but the ball  got a deflection out for a corner.”

Doyle was disappointed with the concession of the goal. It was from a corner and Buckley was able to jump unmarked to head home.

He said: “They score from a set-piece which is disappointing from our side because it was very early into the second half.

“We would’ve liked to have created a little bit more. That’s three strong performances and we go into a big game now on Saturday against Drogheda."

The Town manager was forced into making two changes in the first half against Sligo  with Dean Byrne and Callum Warfield going off injured. They join Rob Manley on the treatment table.

Doyle said: “Sometimes you class yourself unfortunate when you have to make one change in the first half, we were in a position where we had to make two and both attacking players. We’ll assess both of them.

“We have really good players here and some lads will change in that starting 11. I feel we have a strong squad. People probably underestimated this group.”

Longford Town face Drogheda United in their next game on Saturday at Bishopsgate. Drogheda were promoted last season after winning the First Division. Doyle knows these are games they have to get positive results in.

“People will say the teams that have just come up into the Premier Division and the teams that have been down around the bottom end of the table,  you always say ‘you have to pick up wins and results in those games’. We are no different, we need to do that.

“We have picked up some useful points up until the Sligo defeat. We need to be at it again this weekend.

“We will face a really good Drogheda side who we know really well. They’ve added quite a few experienced players. It will  be a real challenge and a stern test but they’ll know they’ll have the same tough task facing us.”