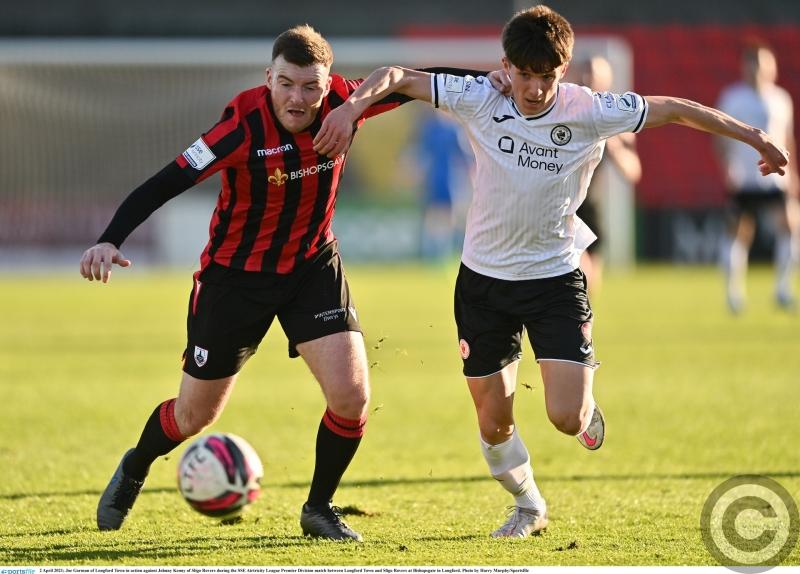 The stark reality of the difficult  battle that newly promoted Longford Town are facing in the Airtricity League Premier Division this season was clearly illustrated at Bishopsgate on Friday evening last, even if they were rather unfortunate to lose against Sligo Rovers.

On a high in the aftermath of the tremendous home victory against Derry City and the subsequent remarkable revival in coming from two goals down to snatch a draw away to Bohemians, the feelgood factor suffered a setback as the unbeaten record was broken on the Easter weekend.

Stretching back to their superb success story that yielded wonderful wins against UCD, Galway United and Shelbourne in coming through the minefield of the play-offs in November, Longford carried a lot of competitive momentum on their return to the top flight for the first time since 2016 and the four points picked up from the opening two fixtures was a major boost.

Daire Doyle and his players now have to deal with the disappointment of the defeat against Sligo and there is no doubt that the Town will show the spirit and character needed to get back on track, starting with the crucial clash against Drogheda United at Bishopsgate this Saturday evening.

Drogheda were also promoted from the First Division last season after winning the league title and with their squad strengthened significantly few can argue with the fact that this is another tough task for the Town.

The loss of prolific striker Rob Manley, currently on the casualty list, is proving to be a big blow and Longford were lacking a cutting edge in attack in their failure to score against Sligo.

The Town cause was further hampered when both Dean Byrne and Callum Warfield were forced to retire injured in the first half but the manager Daire Doyle has a talented squad at his disposal and some other players will get the opportunity to feature in the starting team.

Sligo came to Bishopsgate on a glorious Good Friday evening, clearly in a confident frame of mind after the home draw against Dundalk and the away win over Waterford, and their vast experience in the Premier Division stood to them on this occasion.

The physical presence of the influential figure of Greg Bolger in the midfield sector proved to be a key factor in the eventual outcome but Longford were justified in venting their anger at a number of dubious decisions by Mayo referee Damien McGrath that went against them in their determination to get something out of the game.

In the end the Town were undone by a set piece situation with Sligo Rovers central defender Garry Buckley scoring the decisive only goal in the 47th minute of the match at the eerily empty Bishopsgate Stadium.

The current Covid restrictions meant yet another home game behind closed doors and in normal times the vociferous home support would probably have made the difference in the bid for a positive result.

After a rather uneventful first half, the deadlock was eventually broken with a couple of minutes gone on the changeover when Buckley directed a close range header into the back of the net.

A Robbie McCourt corner was flicked on by Romeo Parkes into the path of Buckley and he hit the target from a few yards out, much to the sheer dismay of Longford who had defended resolutely up until then.

Having said that, it took a fantastic save from Town keeper Lee Steacy to keep out a goalbound strike from rising young Sligo star Johnny Kenny in the 39th minute and it must be said that the visitors were the better side in the first half.

Longford were facing a real uphill battle when they conceded the crucial goal in the early stages of the second half but almost got back on level terms  in the 50th minute when Aodh Dervin drove a shot just inches  wide.

Sligo were content to sit on the cushion of their slender advantage and stuck it out to collect all three vital points in extending their unbeaten start to the season.

It was very frustrating indeed for the Town but the equaliser  nearly materialised in the 84th minute. Dylan Grimes won the ball in the box and proceeded to set up a great goal chance for Aodh Dervin but the local star saw his shot deflected just wide of the post and out for a corner.

There was another very anxious moment for Sligo in first half stoppage time when a Longford corner, fired into the box by Paddy Kirk, was deflected across the face of the goalmouth by Rovers player Romeo Parkes close to the line. It would have been a different story had the ball ended up in the back of the Sligo net just before the break.

While the Town tried very hard to recover from the sickening blow of conceding the goal at the start of the second half, a much improved performance on the changeover got no reward when a draw would have been the fairest result in a generally scrappy game.