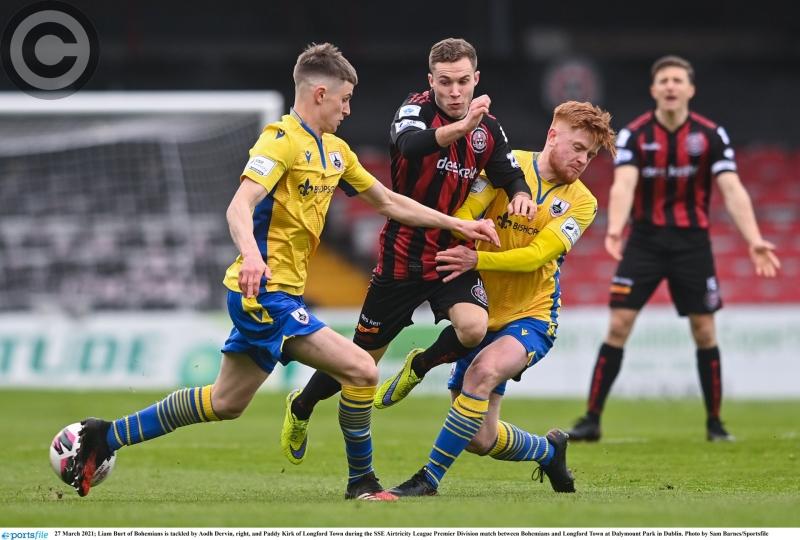 After their remarkable revival in battling back to earn a 2-2 draw against Bohemians at Dalymount Park on Saturday last, Longford Town will be seeking another positive result against near neighbours Sligo Rovers at Bishopsgate this weekend.

The game on Good Friday has a 5.45pm kick-off and it's such a pity that the Round 3 fixture is behind closed doors as a very big crowd would have been expected to go through the turnstiles.

That cannot happen at the moment due to the Covid restrictions amid this frightening pandemic and Sligo will be coming to Bishopsgate in a confident frame of mind after drawing with Dundalk and coming from behind to win away to Waterford last weekend.

Rovers manager Liam Buckley is fairly hopeful that this might be their year and last season the shrewd coach guided the Western club to a fourth place finish behind Shamrock Rovers, Bohemians and Dundalk.

That was good enough for a spot in Europe and on the evidence of their 2-1 victory over a  new look Waterford side at the RSC on Friday night last, Sligo are going to be hard beaten this season.

Waterford took the lead after only five minutes when exciting prospect Cian Kavanagh found the back of the net from a fine header but Sligo got back on level terms in the first half with a super strike from the returning Romeo Parkes.

It remained at 1-1 until the 53rd minute when Sligo went in front thanks to a brilliant goal from man of the match Jordan Gibson. The former Stevenage winger, who is on loan with Sligo, hit the target with a spectacular strike for what proved to be a worthy winner.

Sligo keeper Ed McGinty is a good shot stopper while the defence is a very tight unit with John Mahon and Colm Horgan in the full back positions while experienced Gary Buckley and Robbie McCourt are a solid partnership in the centre of the back four.

McCourt joined Sligo this season after being with Waterford for the 2020 Premier Division campaign and who previously was with West Brom for three years.

The vastly experienced Greg Bolger is the main man in midfield and we can expect a big battle in that sector in Friday’s eagerly awaited match.

Young Niall Morohan from Carrick-on-Shannon has made his position in midfield alongside Bolger and he is an outstanding prospect.

Romeo Parkes also plays in the midfield area and he is lethal in front of the posts. Another major threat on the Sligo team is superb winger Jordan Gibson.

Up front former Waterford player Walter Figueira is a real talent while the final piece of the jigsaw is a 17-year-old local Johnny Kenny, son of the former Sligo legend.

Kenny scored over 30 goals for the Sligo U-17s on his way to graduating to the senior side and this hot property is destined for big things.

Such is the strength of the Sligo squad that Ryan De Vries had to be content with a place on the bench against Waterford. The South African has been capped five times for his  adopted country New Zealand and is an exciting prospect.

David Cawley, another quality player, was brought on in the second half against Waterford while Regan Donelon is also part of the strong Sligo squad and unlucky not to be in the starting eleven.

Longford and Sligo are currently deadlocked on four points apiece in second and third place respectively in the Premier Division table and the Town will be quietly confident of extending their unbeaten start to life back in the top flight.

Substitute Conor Davis was the hero against Bohemians with his two goals late in the game completing a great comeback but it will take another massive performance from Daire Doyle’s side  to get something from the game against Sligo.