Sligo Rovers next at Bishopsgate this Friday evening, kick-off 5.45pm 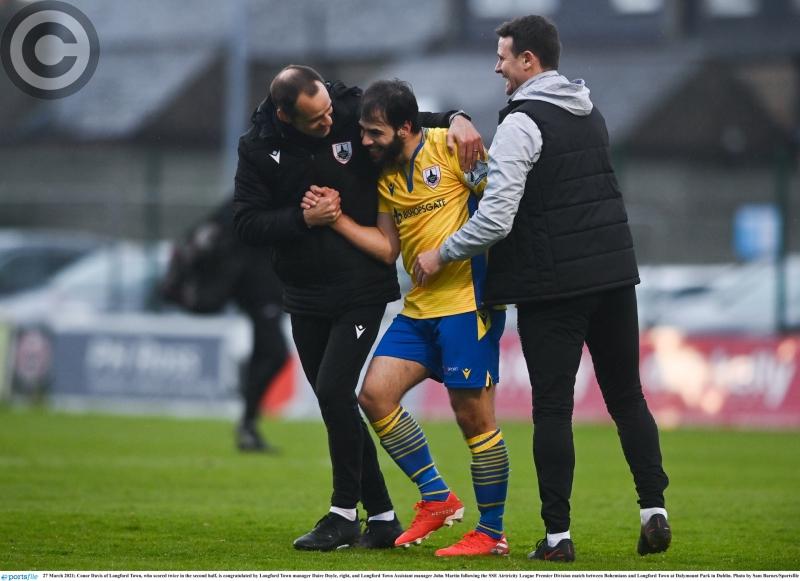 Longford Town hero Conor Davis, who scored twice in the second half against Bohs, is congratulated by Daire Doyle & assistant manager John Martin (left) after the game Pic: Sam Barnes/Sportsfile

Longford Town boss Daire Doyle stated he told his players “he wanted a reaction” when they came in at the break trailing 2-0 against Bohemians in the Premier Division clash at Dalymount Park on Saturday evening last.

Longford upped their game in the second half and two goals from substitute Conor Davis earned them a point.

Doyle said: “We told the players  we wanted a reaction from them. For the first 35 minutes Bohs dominated the game.

“Bohs created a number of chances; Georgie Kelly - you could see Talbot (James) was playing a lot of long balls, Kelly was able to pin our centre-backs and Tierney (Ross) was causing problems with his runs.”

Doyle was quick to praise goalkeeper Lee Steacy for his first half performance. The netminder made a number of excellent saves.

“We were fortunate going in 2-0 at half-time because in that first 35 minutes Lee Steacy made a number of very good saves.

“Going in 3-0 at half-time makes it much more difficult. At 2-0 the game is still in the balance and the next goal is key; we said that to the lads. We told them it was about being a lot better.”

As the game went on Doyle made changes that had the desired impact on the game with Conor Davis scoring both of Town’s goals.

The Longford manager said: “The substitutes made a huge contribution and once we got that first goal, which was a superb effort from Conor Davis, it looked like we were going to score again.

“We did and towards the end we looked like the team who would win it. It’s another point on the board and we’ve been competitive in the two games.”

Doyle is delighted with the panel of players he has and the contribution they have made in the first two games: “We have a strong group. We have lads that can come on and make an impact.

“Conor Davis came on and got a brace in his first game back in a long time. He’s a great addition to our group and we are expecting big things from him.”

Longford Town will be buoyed up from this result for the visit of Sligo Rovers to Bishopsgate this Friday evening. Sligo came from behind to beat Waterford last weekend.

Doyle is relishing the challenge: “It’s great to be playing these teams. To be playing Sligo next. This is where we want to be. It’s where this club should be.

“We need to ensure we do everything we can to give ourselves the best chance to compete every week. If we do that, we have a chance of picking up points.”

The Longford  boss didn’t get a chance to watch Sligo on Friday night last but will do his homework during the week. For him it’s all about the Town getting their own game right so that they’re ready for Liam Buckley’s side.

“We know the threat that they’ll pose. I didn’t get to watch their game against Waterford because we were on a zoom call and were prepping for the Bohs match. I saw the goals and some highlights but I will watch the whole game.

“Everything is about our game. We have proven over the last couple of matches we are here because we deserve to be here.”