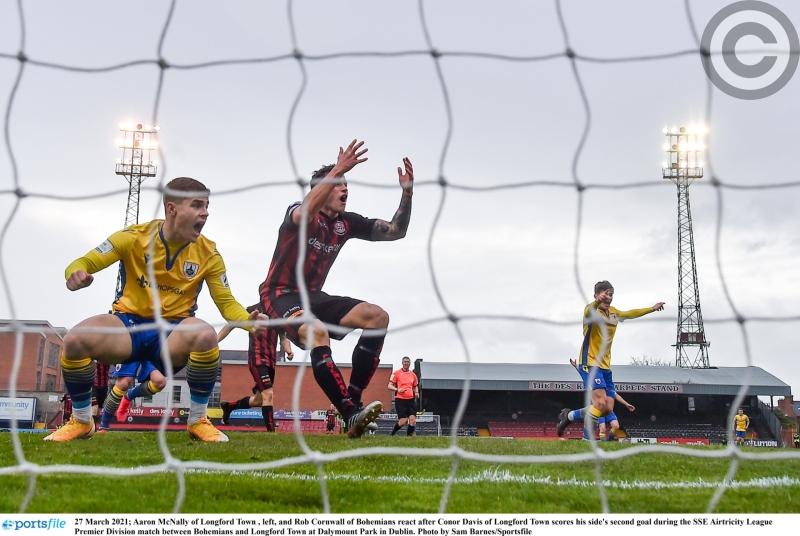 Lazarus like Longford Town came back from what appeared to be a dead and buried situation to snatch a 2-2 draw against Bohemians in a dramatic finish at Dalymount Park on Saturday last.

Hot favourites Bohs, runners-up to Shamrock Rovers in the 2020 SSE Airtricity League Premier Division, were seemingly cruising to their expected win after establishing a commanding 2-0 lead in the first half

It looked all over as a contest but the terrific spirit that lifted Longford through the play-offs path to promotion last season came to the fore yet again as never say die Town enjoyed a new lease of life in a remarkable revival.

The introduction of Conor Davis during the course of the second half proved to be a master stroke by the obviously inspirational manager Daire Doyle and the new striker made a major impact.

Deadly Davis got the crucial goals in the 76th and 86th minutes to earn Longford a very vital point in the quest to retain their treasured top flight status and the focus now switches to the next league game against Sligo Rovers this weekend.

In normal times the visit of near neighbours Sligo would attract a very big attendance to Bishopsgate but the local soccer grounds on the Strokestown Road will be eerily empty on Good Friday.

The current Covid restrictions means yet another home game behind closed doors which is a pity but this did not stop the Town scoring a tremendous 2-0 win against Derry City in the opening fixture a couple of weeks ago.

After engineering their version of the great escape at Dalymount Park, the momentum is with Longford in their fierce desire to spring another surprise against the also unbeaten Sligo side.

It promises to be a cracking contest this Friday evening (kick-off 5.45pm) as the Town seek another positive result on their exciting return to the Premier Division.  (Live on WATCHLOI)

Report and reaction from the match against Bohemians and preview of the showdown against Sligo Rovers on pages 44, 45, 46, 47 and 48 in this week's Longford Leader