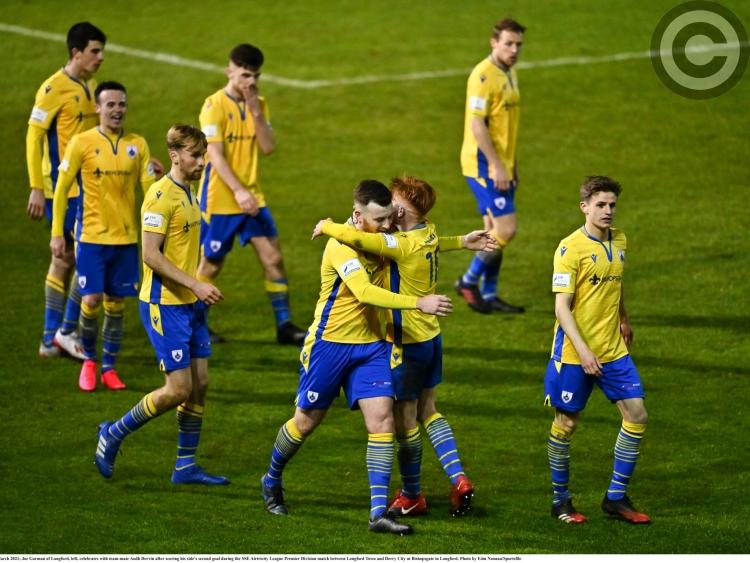 After scoring the killer second goal for Longford Town in the closing stages of the league game against Derry City at Bishopsgate, Joe Gorman celebrates with Aodh Dervin Pic: Eóin Noonan/Sportsfile

Longford Town midfielder Aodh Dervin hopes his side’s 2-0 win over Derry City at Bishopsgate on Saturday evening last in their opening game of the 2021 Premier Division season will give people something to talk about.

Dervin and his team-mates weren’t happy with how the Town were written off before a ball was kicked.

He said: “People were looking into our pre season results. We kept saying let them think we are just a First Division side. Everyone kept writing us off.

“It’s only the first game but the amount of work we put in. Every single player covered every blade of grass. I never felt so good winning a game of football.”

Longford took the game to Derry from the start and opened the scoring in the 8th minute. Dervin stated their game plan was to make a good start and control the game in spells: “

“We said we’d get in their faces straight away and take the game in spells. Win our battles; I don’t think there was one person there that didn’t win their battle.

“We scored and stayed in control, kept fighting. Grimsey had a chance first  and then he finished the second one. It was a great finish.”

It was Dervin’s free-kick that led to Longford's second goal with Joe Gorman finishing from close range in the 73rd minute.

Aodh had another free-kick minutes later that came crashing off the crossbar from about 40 yards out.

“I won’t shut up about it,” he joked. “Every week since I came back I said I wanted to add goals and I made it no secret. I said I better get myself on set pieces. I’m  going to keep practicing.”

Dervin was delighted with the performance the team put in on Saturday. He knows every game is going to be a battle but the Town are willing to put up a fight.

“Look how hard we worked in the play-offs last season and we know we can compete this season with the lads that we brought in.”

He said the new players that Daire Doyle has brought in have really impressed him and are a huge help to him. “I’ve never played in the Premier Division. Paddy (Kirk) came in and even in the huddle he had us up for the game. These are little things you see from top flight clubs.”

Next up for Longford is a visit to Dalymount Park this Saturday evening (kick-off 4pm) to take on Bohemians. Dervin believes that if the Town can put in a repeat performance anything can happen.

He said: “We had a whole week to re-group and focus on them. As long as we keep working and do what we did against Derry we are in with a chance against any team. We are very fit and we will use that to our advantage.

“People might think we aren’t fit because we aren’t a full-time side. We train like we are full-time and take it seriously.”