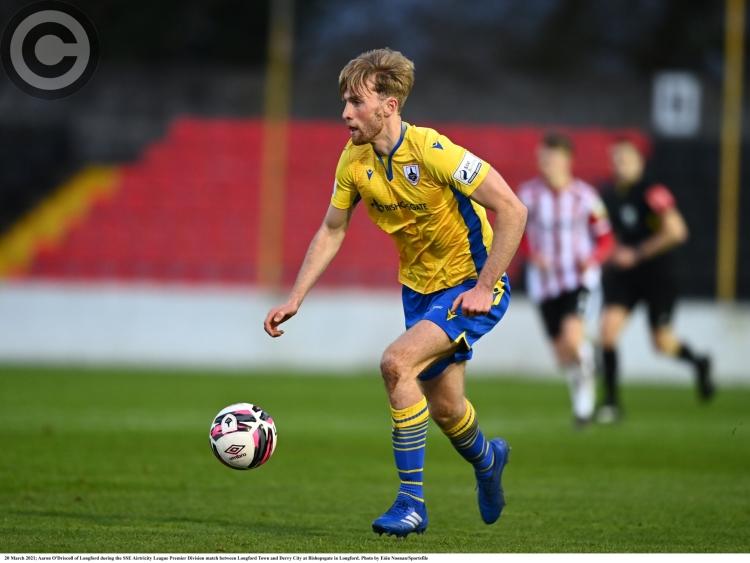 The Town management will be delighted with the opening round result that leaves Longford on top of the table while Bohs boss Keith Long must be very disappointed with the 1-0 defeat they suffered away to a fast improving Finn Harps side.

Over the last couple of weeks the pundits in the National media gave their opinions on the 2021 season and they all came up with the prediction that the underdogs Longford Town are facing a fierce relegation table and a probable return to the dreaded First Division according to their ‘expert’ analysis.

Town manager Daire Doyle and his assistant Johnny Martin are both proud former Longford players who featured in FAI Cup Finals for the club and always gave 100% on the pitch.

These two people are now giving the same total commitment as a management team and if last Saturday’s inspired performance against Derry is anything to go by we can expect many exciting games from the Town team in the months ahead.

Lee Steacy started as the first choice keeper against Derry while the recently returned Michael Kelly was the reserve netminder sitting on the bench for the opening league fixture.

Joe Gorman was partnered in the centre of the defence by loan signing Aaron O’Driscoll, whose father Maurice is a former Bohemians player so they could be divided loyalties at Dalymount Park this weekend.

Longford’s longest serving player, Karl Chambers, started in the right full position while former Bohs defender Paddy Kirk slotted in at left full and there is no doubt that he is going to prove a very shrewd signing this season.

The Town midfield sector was well marshalled by Dean Zambra while Aaron Bolger showed why he is so highly rated in producing a solid performance.

Particularly prominent in the middle of the park was local star Aodh Dervin, whose workrate was immense, while the effective Dean Byrne and the impressive Dylan Grimes slotted in behind the loan striker Rob Manley.

Manley covered a lot of ground in making it difficult for the Derry defence and he has the ability to pose major problems in the attack this season.

Rob’s brother Joe was brought on in the 73rd minute to add some height to the Town defence while exciting winger Callum Thompson made a good impact when introduced during the course of the second half.

A total of four substitutes were used on the changeover with Aaron Dobbs and Aaron Robinson also coming off the bench in the closing stages of the game.

There is no doubt that the Town deserved their victory and they could have scored another couple of goals such was their dominance.

Bohemians will be bidding to bounce back from the 1-0 defeat against Finn Harps and were punished for some slack defending for the only goal of the game in Ballybofey.

The Dublin club had quite a few debutants featuring in their opening league fixture against Harps as manager Keith Long is planning to build on the excellent second place finish last season.

A few of the Bohemians newcomers did not play at Finn Park due to injuries but Long has assembled a very strong squad that could be chasing honours at the end of the season.

Former Limerick, Waterford and Linfield player Bastien Hery is an exceptional talent who has made 11 appearances in Europe for the Belfast club.

The midfielder has also represented Madagascar at International level but he missed the match against Finn Harps due to injury.

Another new Bohs signing Stephen Mallon played with Derry City last season but he is also on the injured list.

Former UCD and Dundalk striker Georgie Kelly can make a big impact with Bohs and is clearly a big threat in attack while former Town defender Anto Breslin will also be in action for Bohemians.

Anyone who looks at the Premier Division table following the opening round fixtures will be so surprised to see Longford Town, Drogheda United and Finn Harps in the top three in what was a great start to the season by the much less fancied clubs.

It is early days and while nobody is getting carried away, there was a lot to like about the so determined manner in which the Town outbattled Derry to take all three valuable points at Bishopsgate last weekend.

Thus the confidence factor will be high after that terrific boost and while another positive result for Daire Doyle’s side could well be achieved at Dalymount Park this Saturday evening, Bohemians are unquestionably very tough opponents.