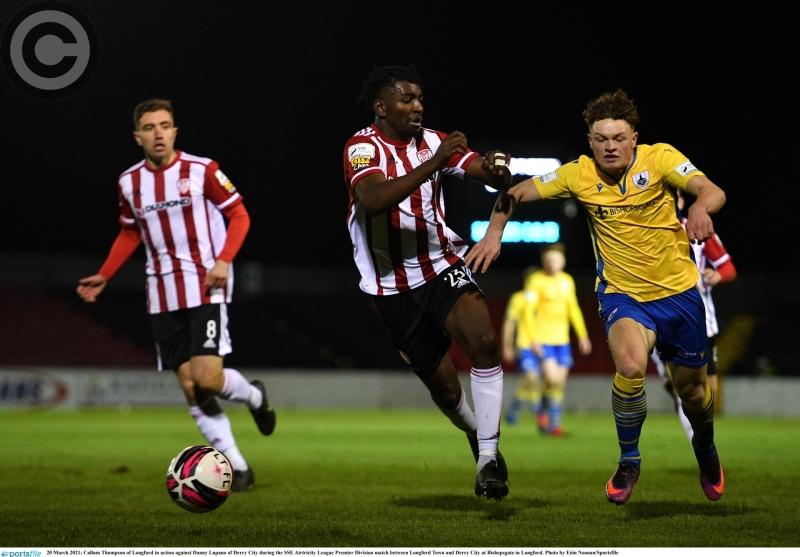 Generally considered to be complete outsiders in the top flight and facing a relegation battle according to the domestic soccer experts, promoted Longford Town - strengthened by a number of shrewd new signings - have already begun to confound their critics.

The impressive manner in which the fired up home side dismantled a much fancied Derry City outfit in the opening league fixture on Saturday evening last brought great joy amid the demoralising coronavirus pandemic as competitive sport action returned to the locality for a sight not seen since November.

Back in the Premier Division for the first time since 2016, Longford Town rose to the occasion in most impressive fashion to score a surprise win over their stunned Ulster opponents and the midlanders are now perched proudly on the top of the table even if it is early days.

It was a pity no supporters were allowed into Bishopsgate last weekend due to the current Covid restrictions to witness a wonderful start to the new season as the totally committed Longford team produced a high energy performance packed with pace to emerge victorious in some style.

Make no mistake about it, tremendous Town deserved to collect all three valuable points in proving the pundits wrong and from the moment Dylan Grimes broke the deadlock as early as the 8th minute the force was firmly with the club who continue to punch above their weight against the supposedly stronger sides.

Grimes, a constant threat for the Derry defence, weaved his way into the box to drill a low shot into the corner of the net and it was game, set and match when Joe Gorman pounced to fire home the killer second goal in the 73rd minute.

Local star Aodh Dervin, who really made his presence felt in the second half, had his free-kick parried by the opposing keeper Nathan Gartside but Town defender Gorman was alert to the breaking ball in hitting the target from a few yards out.

And it almost got even better for Longford a couple of minutes later when midfield dynamo Dervin drove a cracking  long range free-kick against the Derry crossbar.

The visitors, who appeared to approach the game in a rather complacent manner, had a couple of goal attempts in the first half through close range efforts from the head of towering defender Eoin Toal.

And just before the break the Town keeper Lee Steacy made a fine reflex save to keep out a shot from David Parkhouse but moments earlier Dean Byrne was narrowly off target in his effort to score a second goal for the midlanders.

Right at the start of the second half there was another lucky escape for Derry with their keeper Gartside (called into the Northern Ireland senior squad) producing a terrific save to deny Byrne.

Longford defender Paddy Kirk almost found the net from a fine effort in the 59th minute before Gorman struck for the second goal to put the issue beyond all doubt.

The absence of what would have been an electric atmosphere at Bishopsgate in normal times with the backing of a big home support certainly did not hinder the Town team who came out with all guns blazing to shoot down Derry City.

Dylan Grimes shot narrowly wide with just two minutes gone on the clock and this was a taste of things to come as the excellent livewire winger tormented the Derry back four.

The Town then had a strong claim for a penalty turned down by the referee in the 8th minute when a Dean Byrne shot appeared to hit the hand of a City defender in the box but moments later the first goal materialised.

The consistently hard working striker Rob Manley played the ball into the path of Grimes who got past Derry defender Danny Lafferty on his way to finding the back of the net.

Outplayed in the early stages of the game, Derry eventually got their act together and almost equalised in the 28th minute when a close range header from Eoin Toal was deflected out for a corner.

Toal was denied again in the 38th minute when another header was cleared close to the Longford line but Derry were fortunate not to fall further behind when Dean Byrne smacked a shot just off target with time running out in the first half.

Moments later, Town keeper Lee Steacy came to the rescue in doing so well to stop a shot from Derry striker David Parkhouse.

Longford were under pressure but made a strong start to the second half with another goal attempt from Dean Byrne saved by the City netminder Gartside.

Derry captain Toal, always a threat in the set pieces, knocked a header just wide in the 56th minute but whatever chance the visitors had of salvaging the situation was sunk when Joe Gorman popped up to poach a second goal for Longford with 73 minutes gone on the clock.

Next up for the Town is a meeting with Bohemians at Dalymount Park on Saturday evening (kick-off 4pm) and Daire Doyle’s courageous side will be facing that fixture in a fairly confident  frame of mind after defeating Derry.